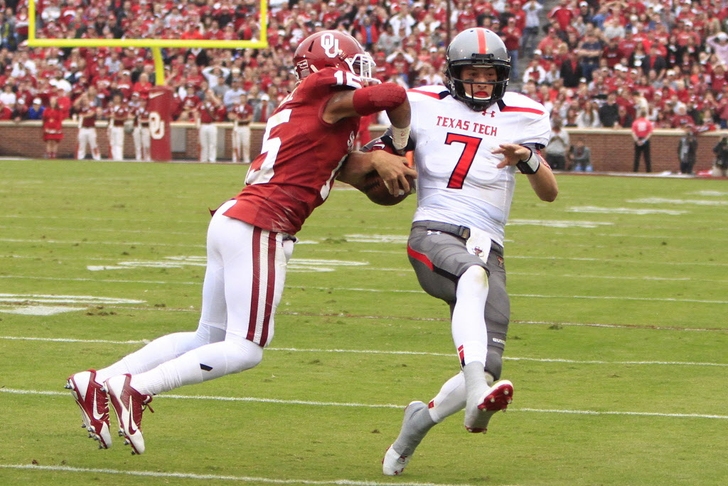 After an ugly loss to Baylor, the Oklahoma Sooners face Texas Tech in dire need of a victory.

The Sooners have lost three of five games to plummet in the rankings and Big 12 standings, while Texas Tech has been a mess over their previous six games. One team will finally get back on track with a victory.

Oklahoma Outlook: Saying things did not go well against Baylor last week may be an understatement. The Sooners flopped in a 48-14 drubbing, that also saw starting quarterback Trevor Knight leave with a shoulder/head injury.

The Sooners are now out of the top 25 for the first time this year, and are likely out of the Big 12 picture with their third loss of the season.

On the bright side, Oklahoma has a chance to win out during their final three games and potentially finish with a 9-3 record. Knight's status is still up in the air in the short-term.

Texas Tech Outlook: The Red Raiders have given up an astonishing 116 points in the last two games (both losses, unsurprisingly) to TCU and Texas.

Things have spiraled out of control for Texas Tech after a 2-0 start to the year, as they are now 1-5 in the conference and 3-6 overall.

Sophomore quarterback Davis Webb has had a solid season though, throwing for 2,539 yards and 24 touchdowns.

What to watch for: The Sooners need to play better in every aspect of their game if they want to come away with a win - even against a struggling Texas Tech team.

The offense may be operating with backup quarterback Cody Thomas if Trevor Knight is unable to go on Saturday.

Regardless of who is under center, the Sooners defense needs to improve after getting torched for 48 points and 544 yards last week.

Sooners confident in backup Cody Thomas if called upon against Texas Tech (NewsOK.com)

The Sooners should get a bounce-back win against a struggling Texas Tech team. With Trevor Knight, this game gets easier but even without him, Oklahoma should have enough firepower to overcome a Texas Tech team who has lost five of six games.