Oklahoma Football News: Sooners Lead Tulsa 31-0 At The Half 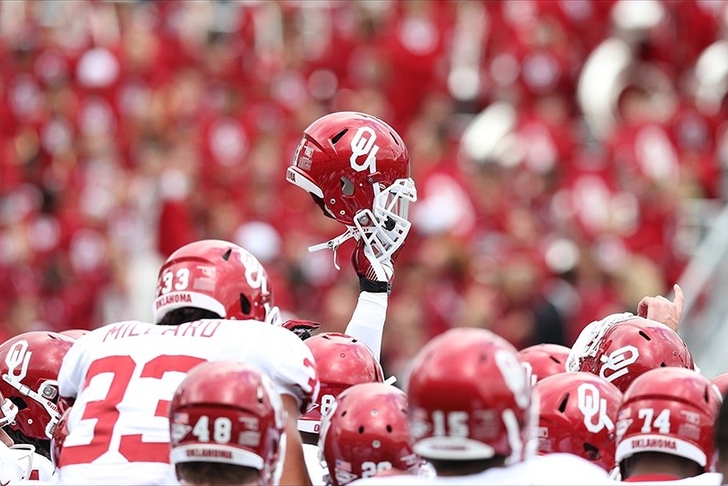 The Sooners traveled to Chapman Stadium in Tulsa to take on the Golden Hurricanes, and the first half certainly wasn't ideal for Tulsa fans hoping they'd pull off the upset.

Oklahoma absolutely dominated the first quarter, and reality quickly set in for a shell-shocked Tulsa squad. Oklahoma's first play from scrimmage was a 54-yard hookup between QB Trevor Knight and Sterling Shepard, and just two plays later Keith Ford scampered in for a seven-yard touchdown.

After a few quick drives fizzled out, Knight took over at his own 28, then put on a show. After driving to the Tulsa 31, Knight decided to take off himself, and a brilliantly-executed 31-yard run doubled the Sooners' lead with 6:35 left in the first.

Oklahoma's defense held strong, giving the Sooners the ball back just over a minute later, and they went right back downfield on a 12-play, 81-yard scoring drive that culminated in a short touchdown pass to senior TE Blake Bell.

The Sooners led 21-0 at the end of one, and their dominance continued in the second quarter. Another defensive stand set up a 38-yard field goal for Michael Hunnicutt early in the period, and Tulsa finally looked like they had things together on their next drive.

The Golden Hurricanes drove 75 yards deep into Oklahoma territory, but a red zone fumble recovered by Jordan Phillips averted the danger and gave the Sooners possession at their own 18. On the very next play, Alex Ross broke into space for an 82-yard touchdown run, and Tulsa's misery continued.

The Sooners led 31-0 with 6:13 left in the second, but were unable to get any more points on the board from there. The defense held strong, though, and the half ended with Oklahoma holding a comfortable 31-point lead with no points allowed.

Sterling Shepard and Alex Ross both played well on offense, but it was QB Trevor Knight making everything tick. Knight finished the half with 246 total yards and two touchdowns (one rushing, one passing), and his mobility and vision gave the Tulsa defense nightmares.