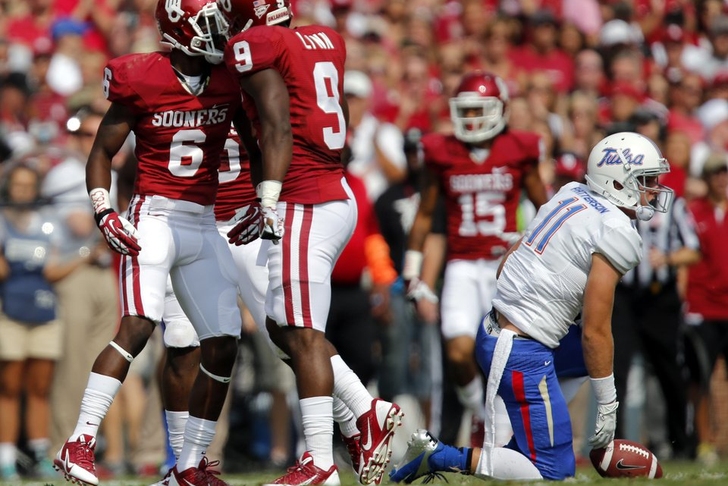 After a first half that was mainly one-way traffic, the Tulsa Golden Hurricane finally put points on the board early in the second half.

Tulsa managed to score their first (and only, as it would turn out) touchdown of the game thanks to some solid work from Golden Hurricane QB Dane Evans. Evans finished 23/43 for 204 yards, one TD and two interceptions, and his overall performance was poor, but the scoring drive was well-executed. Unfortunately, the Oklahoma defense took it personally.

The Sooners responded with 21 unanswered points, with 14 of those coming in a one-minute span soon after the Tulsa TD.

Keith Ford sprinted into the end zone for a 23-yard TD run, and just three plays later, Geneo Grissom intercepted a Dane Evans pass and ran it back 38 yards to the house.

From there, the Sooners went on cruise control - a TD pass at the start of the fourth quarter from Knight to Sterling Shepard turned out to be the last points scored in the game. The 52-7 victory was an impressive scoreline, but in truth Tulsa was so unimpressive (with the exception of their lone touchdown drive) that it could have been much worse.

The Oklahoma quarterback racked up over 330 total yards to go with three touchdowns, and he was instrumental throughout. Running backs Keith Ford and Alex Ross were both excellent, but the game ball goes to Knight for his comprehensive performance.