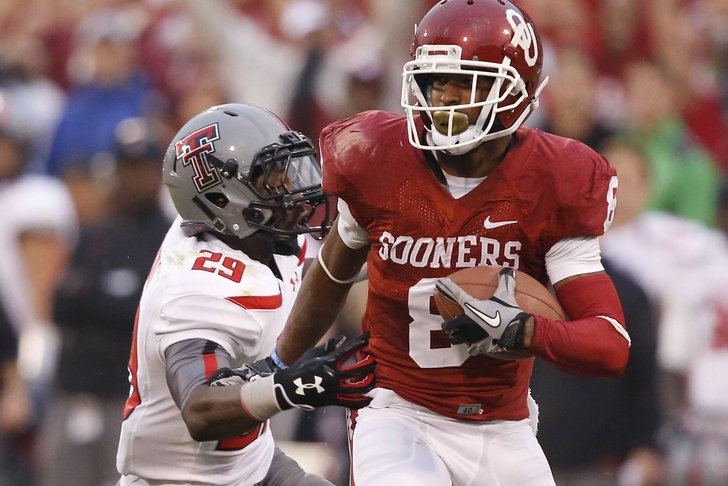 It started out looking like an upset was in the cards, but Oklahoma rallied in the second half to beat Texas Tech 42-30.

This game turned in the fourth quarter, when Oklahoma finally found their rhythm on offense, scoring 21 unanswered to turn a 24-21 deficit into a 42-24 lead.

On a day when Oklahoma really felt the absence of QB Trevor Knight, RB Samaje Perine stepped up in a huge way. Perine finished his day with 213 yards and three touchdowns on 25 carries.

Cody Thomas was far from reliable when dropping back to pass, but he looked great on the ground - he had 103 rushing yards and a TD, almost equaling his output through the air (133 yds and 1 TD with 3 INTs on 10/20 passing).

Oklahoma won this game despite having 133 passing yards to Texas Tech's 393.

Oklahoma might be out of the playoff picture, but they can still reach a top-tier bowl if other results go their way. They'll need to take care of business in their last two games though, and that starts next weekend against a Kansas team that nearly took out #4 TCU. Texas Tech, on the other hand, can no longer make a bowl game this season after today's loss - they'll be playing for pride against Iowa State next weekend and then in their season finale against Baylor.