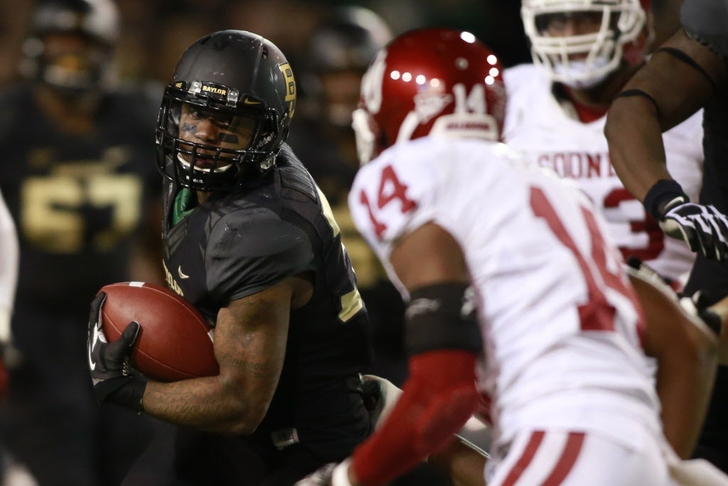 Oklahoma raced out to a 14-3 lead over Baylor in the first quarter, but the Bears responded with 45 unanswered points to stun the Sooners in Norman.

Whatever Art Briles said to his team between the first and second quarter clearly made an impression. The Bears turned a 14-3 Oklahoma lead into a 48-14 obliteration, and from the beginning of the second quarter on, this game was really just one-way traffic.

We've given Bryce Petty plenty of love so far this year, and while he was on fire today, it was one of his receivers that really grabbed our attention. Oklahoma's secondary was completely unable to handle Corey Coleman, who had a career-high 224 receiving yards (!) on 15 catches on the day. Coleman had one touchdown, but it might have been more if Art Briles hadn't turned to his running backs in the red zone.

Despite Petty's gaudy passing numbers, he finished with just one TD on the day...Baylor's running backs saw the lion's share of red zone action, finishing up with five rushing touchdowns shared between three backs.

From Bad To Worse:

Just when it looked like Oklahoma's day couldn't get any more miserable, QB Trevor Knight was stretchered off early in the fourth quarter. There's no information about Knight's status available yet, but it looked like a potentially serious injury to the shoulder he hurt last season.

For Oklahoma, this loss effectively ends any hopes of a playoff bid or a Big 12 title. The Sooners can still finish the year in a respectable bowl game, though, and they'll have to pick themselves up for next weekend's nationally televised game against Texas Tech (most likely without Trevor Knight) if they want to make that a reality.

Baylor will likely move within striking distance of the top four, but they'll need to win their final three games like they did today for a real shot at making it. The Bears have next week off before facing Oklahoma State in Stillwater.