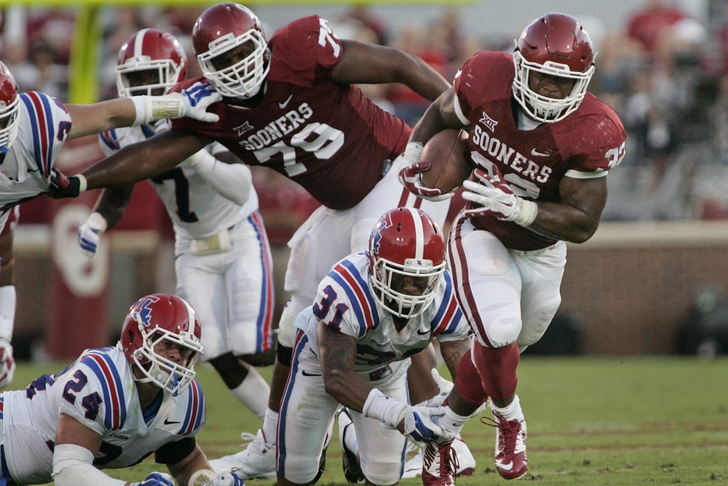 The #4 Oklahoma Sooners were in for a fight from the opening whistle against the #25 TCU Horned Frogs, with the teams trading big play after big play en route to a 24-24 halftime tie.

The fireworks wouldn't stop in the second half. In fact, far from it. #4 Oklahoma and #25 TCU would both make their share of huge mistakes (including three turnovers on three straight plays), but the Horned Frogs would seal the 37-33 upset with a couple of late defensive stops.

Turning Point: After one of the most bizarre stretches you'll see in college football all year (Trevor Knight throws a pick-six, OU blocks the extra point for a two-point conversion, the aforementioned turnover fest), TCU's front seven would stuff OU RB Samaje Perine on a 4th-and-1 on the Horned Frogs 22 with 3 minutes left.

TCU would be forced to punt with under a minute to go, but would knock away a Trevor Knight Hail Mary with time expiring to take down the Sooners.

Oklahoma MVPs: Trevor Knight's efficiency through the air was severely lacking to say the least on Saturday (13-of-34, 2 INTs), but he made big things happen when he did connect in the aerial game (288 yards, 1 TD) - especially when he found WR Sterling Shepard. Knight connected with Shepard seven times for a whopping 215 yards and a touchdown, dicing up the TCU secondary for a big play on three of Oklahoma's four scoring drives.

Add in 13 rushes by Knight for 61 yards, and the redshirt sophomore used big plays and solid field vision to keep the Sooners in it all day long.

That wasn't necessarily all on the Oklahoma defense, however. Boykin continuously announced himself as ready for the big time all day long, creating more than his share of "WOW" moments for announcers, fans, and opponents alike to marvel at.

What’s Next? A motivated Oklahoma Sooners squad will welcome the Texas Longhorns to Norman next Saturday for a 11:00pm CDT kickoff. TCU, on the other hand, engages in another Big-12 heavyweight tussle next Saturday when they travel to face the Baylor Bears at 2:30pm EST.