Halftime Quick Hitters: Oklahoma And TCU Tied At 24 After Two 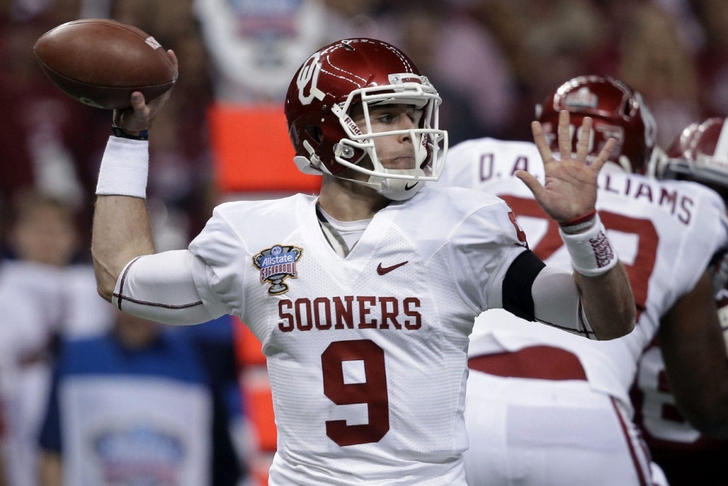 The #4 Oklahoma Sooners stumbled out of the gate against the #25 TCU Horned Frogs, giving up touchdowns on TCU's first two drives while going three-and-out on their first possession. Oklahoma would fire back to tie the game at 14, thanks mostly to two big plays in the passing game courtesy of QB Trevor Knight. However, TCU wasn't ready to go away in front of a raucous crowd in Fort Worth, as both teams traded big plays en route to a 24-24 tie at halftime.

Biggest Play: Oklahoma linebacker Jordan Evans' right-place, right-time interception of TCU's Trevone Boykin was as critical of a takeaway as you will see all year. TCU was up 21-14 nearing the middle of the 2nd, and they were threatening to go up two scores after quickly advancing to midfield. Evans' pick stopped the Horned Frogs dead, and Samaje Perine's 1-yard TD dive on the ensuing OU drive evened things up at 21 - a potential 14-point swing.

Biggest Surprise: Aside from two big passes for 128 yards (and a touchdown) from Knight, Oklahoma's offense was dormant in the first half. That was especially true in the running game where everyone not named Trevor Knight rushed for just 35 yards on 14 carries (32 of those coming from RB Samaje Perine). With OU's rushing attack usually a source of strength, the Sooners need a bounce-back second half on the ground.

Oklahoma Key Player: Trevor Knight (6-of-13, 231 passing yards, 1 passing TD, 5 rushes, 28 yards) didn't get much time on the field to work his magic, but he made due with what he had (especially his YouTube-ready 75-yard TD strike to Sterling Shepard). Knight's wasn't ready to buckle despite the rest of the offense's struggles, and it showed.

TCU Key Player: Welcome to the big stage, Trevone Boykin. The TCU QB was impressive both through the air (14-of-26, 219 yards, 1 TD, 1 INT) and on the ground (13 carries, 48 yards). His mobility gave OU fits during for most of the first 30 minutes (despite his costly interception), stretching the Sooners out and allowing Boykin's other weapons to shine as well.

Who Has The Edge? TCU had an opportunity to extend their lead to take a two-possesssion lead in front of their home faithful and literally threw away the opportunity. Oklahoma survived some major defensive and offensive hiccups to head into the break tied, so give the edge to the Sooners after weathering the TCU storm (and a barrage of penalty calls) in the first two quarters.