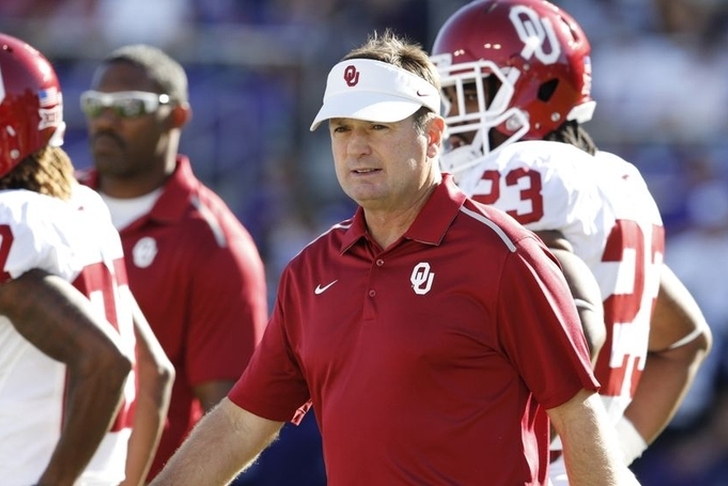 The Oklahoma Sooners' disheartening 24-17 loss to the Texas Longhorns on Saturday has us facing a conundrum. On one hand, Oklahoma HC Bob Stoops has proven himself to be a remarkably consistent force when it comes to keeping the Sooners in the upper tier of Big 12 contenders each and every year. On the other side, Oklahoma hasn't won a conference title since 2010 and has their faces firmly pressed against the glass ceiling.

Even though Stoops had a ton of success early in his tenure, we're worried that the trend will only continue for the foreseeable future - so why can't Stoops seem to get it done lately? Here are three reasons why:

We can count seven or eight playcalling mistakes Stoops made in the second half against Texas, such as running the ball straight at the heart of the Texas defense on plays where the Yellow Jackets stacked eight in the box or not keeping enough blocking on obvious passing down. He's been way too conservative when it counts throughout his career - especially when the team falls down big early. Slow and steady may win some races, but not in marquee Big 12 shootouts.

Oklahoma's defense was consistently one of the best in the country under Venables from 2004-2011, but since he left for Clemson following the 2011 season, the Sooners have been simply average on that side of the ball, ranking 64th, 20th, and 54th in the country in  total defense in 2012, 2013, and 2014, respectively. Things haven't gotten any better this year has they rank 53rd, and are trending downward. What was once the Sooners' calling card is now gone, and they haven't been able to find an identity without it.

This is a pretty damning stat for Stoops:

Flip side of the Texas rebound is yet another big loss for Oklahoma. Sooners have lost six times as a favorite in their last 14 games.

Not only does "Big Game Bob" not show up in big games anymore (2-5 in BCS-level bowl games since 2003), Oklahoma often fails to take care of their business against lesser competition (like Texas) as well. If this stat doesn't get turned around quickly, Stoops could be out of a job sooner rather than later.