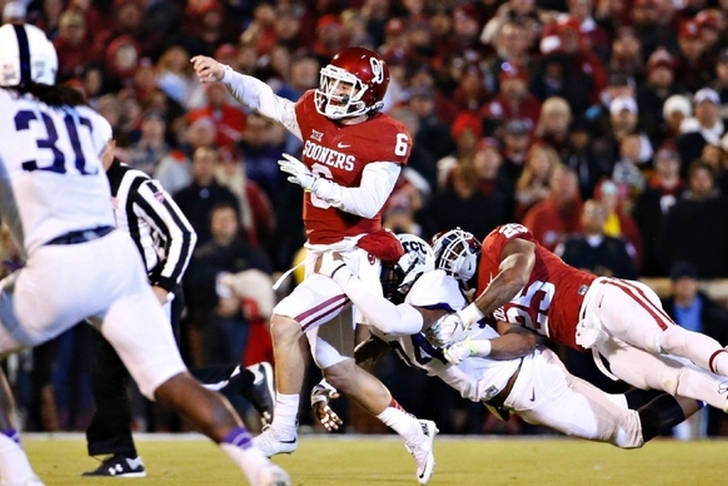 The Oklahoma Sooners are 10-1 and ranked No. 3 in the latest College Football Playoff Rankings. They play hated rival Oklahoma State this weekend, in a game with massive playoff implications. If the Sooners beat the No. 11 Cowboys, they should be in position for a playoff berth. If they lose, the Big 10 likely won't get a berth. It's a must-win game for OU and they'll do just that. Here are three reasons why Oklahoma will CRUSH Oklahoma State.

The Sooners will have Joe Mixon and Samaje Perine against the Cowboys. They were both injured against TCU, but will be healthy enough to play this weekend. That's a big boost for the Sooners, who need those two in the backfield. The dangerous duo has combined for 1,773 yards and 18 TDs this season. They form one of the best RB tandems in college football. The Cowboys will have a tough time slowing them down.

The Heisman Trophy candidate won't let his team lose to the Cowboys. He took a hit to the head against TCU, but he practiced all week. He'll play against Ok State and he'll have a big game. The Cowboys' defense has struggled at times this season and Mayfield could be in for a big game. After all, he's the best QB in the Big 12.

The Sooners have a chance to play in the College Football Playoff. That's something that just won't be happening for the Cowboys. They're simply too far behind in the CFP rankings to catch up. Playing for a chance to ruin your rival's season is nice, but it's not that the same as playing for everything like OU is. Because Oklahoma has everything to play for, they won't come up short against Oklahoma State.