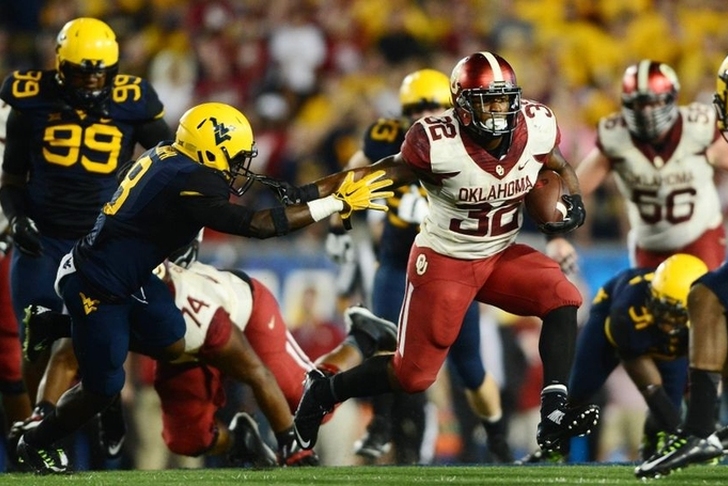 The Oklahoma Sooners and West Virginia Mountaineers meet in Norman on Saturday in a battle of ranked, unbeaten Big 12 rivals, and each team needs a win to keep their College Football Playoff hopes alive. Here are three reasons why Oklahoma will come out on top this weekend:

Oklahoma was inconsistent on defense during the second half of the season, but the return of Eric Striker, Zack Sanchez, and Charles Tapper has solidified this unit as one of the best in the country. Bob Stoops knows what to do with a talented defense, which will be key in slowing down West Virginia's high-powered spread offense.

They've stiffened when it matters the most, limiting Tennesse to zero points in the second half during their comeback victory over the Vols in their first big matchup of the season. The Sooners will make the plays when they need to down the stretch.

Teams don't just walk into Norman and come out with a victory. Over 85,000 screaming fans will be shaking the stadium, which will likely rattle West Virginia's first-year starting quarterback, Skyler Howard, causing him to make a couple of turnovers. Make no mistake about it - the crowd will be a MAJOR factor in this one.

Mayfield had to beat out Trevor Knight to win the starting job for the Sooners, but he's taken the opportunity and run with it. He has mastered offensive coordinator Lincoln Riley's spread up-tempo system and has routinely gashed Oklahoma's opponents, racking up 1,082 passing yards and 10 touchdowns to go along with 139 rushing yards and four more touchdowns.

The numbers are certainly there for Mayfield, and he led a thrilling comeback victory over Tennessee on the road. Mayfield is starting to gain more and more national notoriety, and as he continues to put up big numbers in big games, his Heisman stock will rise even higher. Expect another big game from him against WVU.