3 Reasons Why Oklahoma Is Guaranteed To Beat TCU This Weekend 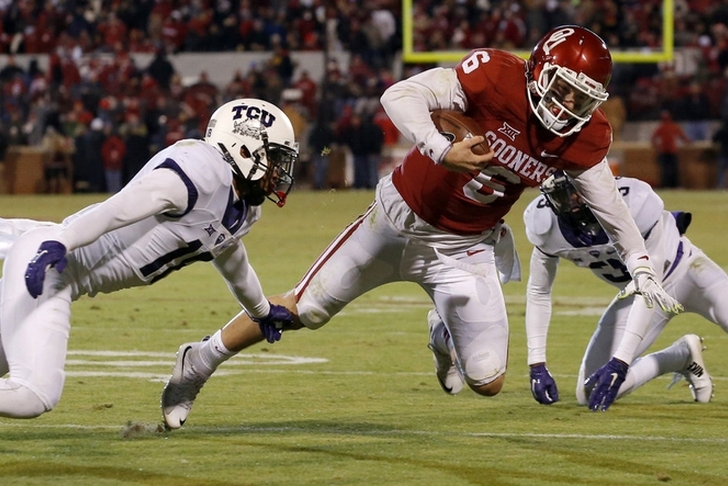 The Oklahoma Sooners have stumbled in their non-conference schedule, going just 1-2 in the first three games of the season. However, they shift their focus to defending their Big 12 title as conference play kicks off this weekend. Oklahoma heads to Fort Worth to take on TCU, and there's plenty of reason believe the Sooners can get their season back on track. Here's why the Sooners will win this weekend:

3) TCU's awful defense
That is putting it nicely. Even though TCU has played three terrible opponents in South Dakota State, Iowa State and SMU, they rank 62nd in the country in yards allowed per game and 65th in points allowed per game. Oklahoma's high-flying offensive attack is much more explosive than anything this defense has seen yet this season. Look for the Sooners to put at least six touchdowns on the board.

2) Recent history
Oklahoma and TCU have only met 15 times on the football field, but recent history certainly favors the Sooners, who have won four of the last five meetings between the two sides. The last four games have all been decided by a single possession, and Oklahoma has been able to come out ahead in three of those contests by making more plays down the stretch. Expect that streak to continue this weekend.

1) Statement game
Simply put, Oklahoma needs this game more. With their College Football Playoff hopes likely dashed, the Sooners are now playing to win the Big 12 title again. Losing this game could cause their season to go into a complete tailspin, but this team is too good for that. They've shifted all of their focus to dominating the conference, and they'll take all of their frustrations out against a vulnerable TCU team.