3 Reasons Why Oklahoma Is GUARANTEED To Beat TCU This Weekend 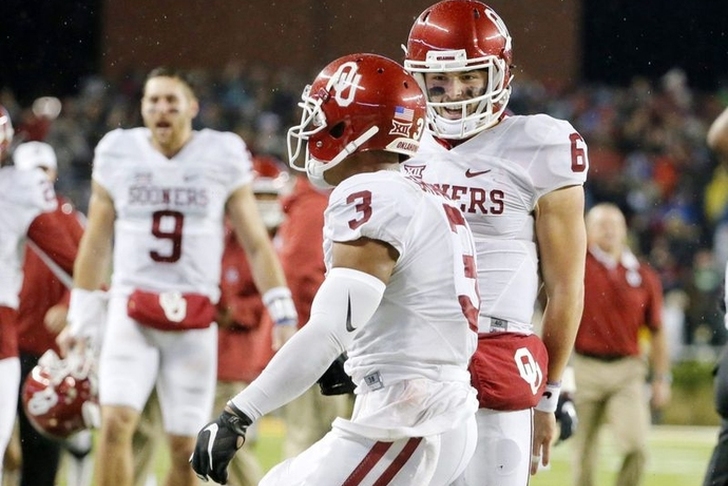 The Oklahoma Sooners have emerged as a legitimate College Football Playoff threat thanks to their victory over Baylor last weekend, and now they have another chance to improve their resume when they host TCU on Saturday. Here are three reasons why the Sooners are guaranteed to knock off the Horned Frogs this weekend:

Oklahoma's offense ranks sixth in the country in total offense and third in scoring offense as they've absolutely shredded every one they've faced. That's bad news for a banged up TCU defense, who has struggled this year due to the abundance of injuries they've had on that side of the ball. The Horned Frogs rank 61st in scoring defense and 59th in total defense - but they haven't face anyone nearly as explosive as Oklahoma. The Sooners should be able to put a LOT of points on the bard in this one.

TCU's offense has been one of the best in the country thanks to the play of quarterback Trevone Boykin and wideout Josh Doctson, but the Horned Frogs might be without both players in this game. Doctson has already been ruled out for the next two games with an ankle injury, while Boykin is questionable with an ankle injury. Even if Boykin does play, he won't be 100%, meaning TCU's offense won't be nearly as effective.

Mayfield has surpassed nearly all expectations placed on him this season, completing over 70 percent of his passes for 3,082 yards, 31 TDs and just five interceptions. He's also proven to be a dual-threat, racking up 301 yards and six TDs on the ground. He jumped to the forefront of the Heisman conversation with his impressive performance against Baylor, and with the way he's playing right now, I expect him to put up eye-popping numbers again against TCU.