2016 Preseason Rankings: See Where Oklahoma Is Ranked In Way-Too-Early Polls 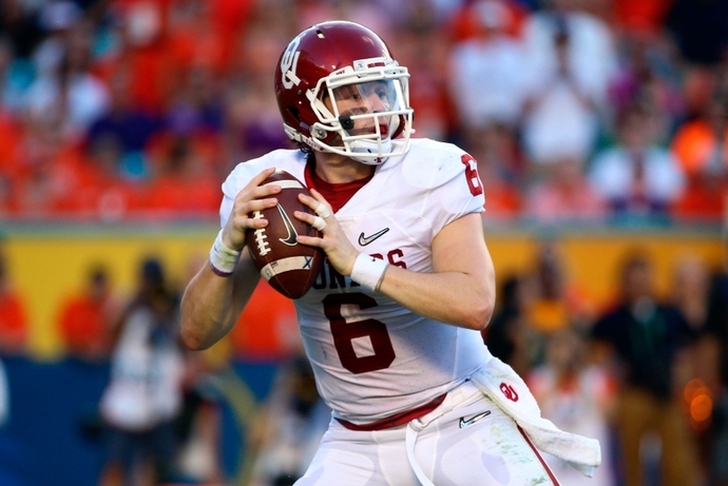 The Oklahoma Sooners won the Big 12 title and made the College Football Playoff in 2015, though the season ended in disappointing fashion with a loss to Clemson in the Orange Bowl. However, many think they'll do even better next year with Heisman candidate quarterback Baker Mayfield and star running back Samaje Perine returning, as they're ranked near the top of seemingly every "way-too-early" top 25 rankings for 2016. Here's how they rank in all major publications:

Chat Sports
Ranking:  4
Breakdown: "The Striker/Tapper/Alexander trio posted 35 tackles for a loss and 15 sacks in 2015, so Oklahoma’s CFP hopes hinge on reloading in the front seven and trying to approximate their production. However, the offense will once again be in fantastic shape, as Baker Mayfield and Samaje Perine represent the best returning QB/RB duo in the nation. An early-season home game against Ohio State will be the litmus test for the Sooners’ run at a second straight playoff berth."

USA Today
Ranking: 8
Breakdown: "This year’s leap back into the title mix should carry into 2016, though Oklahoma will undergo a period of transition on the defensive side of the ball. The Sooners will be even more potent on offense, however, meaning a slight decline on defense should be offset by an uptick in scoring production."

ESPN
Ranking: 5
Breakdown: "The Sooners recovered from a disappointing 8-5 campaign in 2014 by winning the Big 12 and reaching the College Football Playoff this past season. They'll lose some firepower and leadership on defense, especially Striker, who was the team's emotional leader and best pass-rusher. With quarterback Baker Mayfield and tailbacks Samaje Perine and Joe Mixon coming back, the Sooners should again be explosive. Their nonconference schedule is daunting with a road trip to Houston and a home game against Ohio State."

CBS
Ranking: 3
Breakdown: "Bob Stoops gets the guts of his offense back and should be favored to win a 10th Big 12 title. New targets will have to be developed for Baker Mayfield. In offensive coordinator Lincoln Riley's second season, the Sooners should be an offensive powerhouse. That's usually enough to win the league. Another playoff berth should follow."

Sports Illustrated
Ranking: 2
Breakdown: "After Oklahoma lost to Clemson in the Orange Bowl semifinal of this year’s College Football Playoff, it’s not hard to picture a rematch of the Sooners and Tigers next year. Like Clemson, Oklahoma returns its star quarterback in Baker Mayfield, who should only be better in 2016 after another off-season to work with coordinator Lincoln Riley. The running game should also be in fantastic shape with Samaje Perine and Joe Mixon returning after averaging a combined 6.2 yards per carry this season with 23 touchdowns. The Sooners lose top receiver Sterling Shepard and center Ty Darlington, both first-team All-Big 12 honorees, but Dede Westbrook (46 catches, 743 yards this season) seems poised to become the focal point of the passing attack and three of five starters on the offensive line should return.

"Oklahoma’s losses on defense are more troublesome, as defensive end Charles Tapper, linebackers Eric Striker and Dominique Alexander and cornerback Zack Sanchez will all head to the NFL. However, seven other starters should all be back. Cornerback Jordan Thomas (five interceptions, nine passes defended this season) has to step up to anchor the secondary against the usual onslaught of aerial attacks in the Big 12. If he can do that, there’s no reason the Sooners shouldn't be favorites to repeat as conference champions."

FOX
Ranking: 6
Breakdown: "The Sooners will be well-equipped to make a run at a repeat Big 12 title, led by star QB Baker Mayfield and RBs Samaje Perine and Joe Mixon. Replacing stalwart O-linemen Ty Darlington and Nila Kasitati and go-to WR Sterling Shepard could prove daunting. The bigger rebuild comes on defense, but the secondary should shine with CB Jordan Thomas and safeties Steven Parker and Ahmad Thomas."