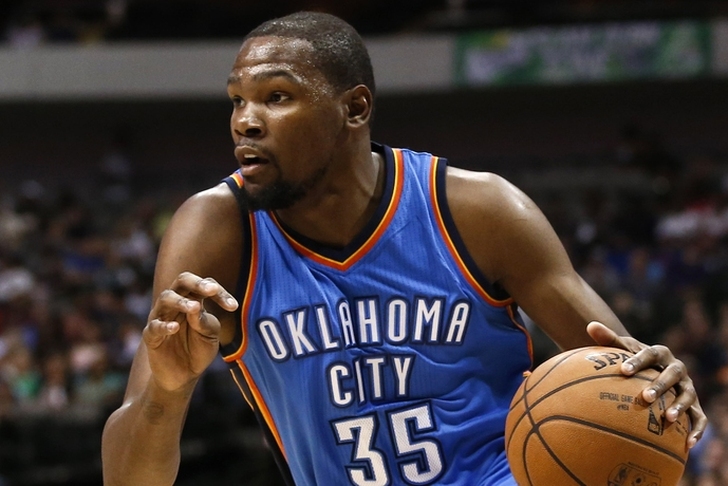 The start of NBA free agency is hours away and the Oklahoma City Thunder are focused on keeping Kevin Durant. However, they're also considering adding another player or two to boost their championship chances. Here are all the latest Thunder rumors and news and you need to know.

Thunder Working For Second Meeting With Durant?
The Thunder are meeting with Durant today, as they make their "pitch" to keep the superstar in Oklahoma City. However, the Thunder are hoping to land a second one as well.

ESPN sources say the Thunder, meeting with Kevin Durant as we speak, are also seeking to land a follow-up sitdown with KD in the Hamptons.

Durant knows the Thunder already, so it's doubtful the second meeting would contain much of a pitch by the Thunder. However, it does allow the team to check-in with Durant and see where he is with his decision.

Thunder After Horford?
Oklahoma City made the surprising move of trading Serge Ibaka to the Magic on draft night, but they may not be done making big moves. In an effort to improve their roster and keep Kevin Durant, the Thunder are working to create enough cap space to sign Al Horford, reports ESPN's Brian Windhorst.

As they prepare to make their pitch to Kevin Durant, the Oklahoma City Thunder have been making calls around the league looking to clear a massive amount of salary-cap space in a move rival executives believe is an effort to go after free agent Al Horford in addition to Durant, multiple sources told ESPN.com. Horford played for Thunder coach Billy Donovan at the University of Florida, where they teamed up to win two national titles, and they remain close.

In order to make the room, OKC has discussed trading both Enes Kanter and Kyle Singler. OKC could also waive Anthony Morrow, who is on a non-guaranteed contract. At least eight other teams are also pursuing Horford, with the Celtics, Hawks, Heat, Lakers and Wizards among the frontrunners.

Durant High On Oladipo?
The trade of Serge Ibaka has been hailed as a strong one for the Thunder, and it appears Durant is also a fan of it. He called it a good move publicly and ESPN's Royce Young reports Durant "raved to friends about Oladipo." While it's still unclear if Durant will stay in OKC, it seems the Thunder have made all the right moves to keep him.

Follow our Oklahoma City Thunder team page for all the latest Thunder Rumors, or download the Chat Sports App!