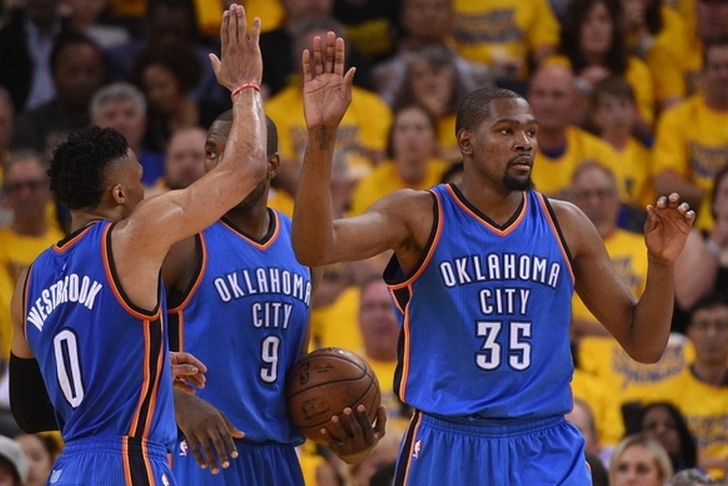 Nearly everything went right for the Thunder. They shot 60.6 percent in the first three quarters, including 42.1 percent from 3-point range. The normally sharp-shooting Warriors hit just 40.3 percent and were a woeful (by their standards) 8 of 28 from beyond the arc through the first three quarters. Both teams didn't even bother putting their key starters on the court for the fourth quarter.

Kevin Durant and Russell Westbrook both had great games for the Thunder. Durant had 33 points on 10 of 15 shooting, and added eight rebounds and three blocks. Westbrook had 30 points, 12 assists and eight rebounds. Had he likely would have had a triple double if the game was even remotely close. But those two weren't the only ones to play well in Game 3.

Defensive stopper Andre Roberson, who reached double figures all of seven times in the regular season, had 13 points. Dion Waiters also had 13 points off the bench, while Serge Ibaka had 14 points.

Stephen Curry had 24 points to lead the Warriors, but was just 7 of 17 from the field and 3 of 11 from beyond the arc. Klay Thompson was the only other player to top double figures, putting up 18 points.

Draymond Green had a rough night in all facets. He had just six points, four rebounds and three assists, all of which are half of his season averages. He made just one shot from the field on nine attempts, the same number of kicks to the groins he had on Steven Adams. Green's kick to Adams' groin resulted in a flagrant 1 foul, although a suspension could be coming from the NBA.

Game 4 of the series is Tuesday in Oklahoma City. Tip-off is set for 9 p.m. ET.