Thunder win Game of the Year candidate against Timberwolves, 139-127 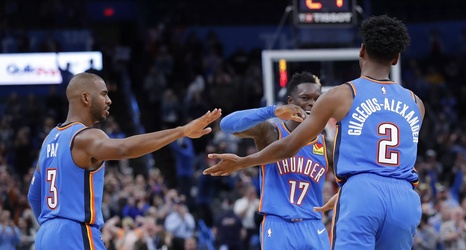 Man, what a crazy win in what is an early candidate for Thunder game of the season. Neither team’s defense played well and the offenses excelled in a game that saw seven lead changes and 13 ties. This was a close game through three quarters, with the score being 97-94. The fourth quarter was a tale of two parts, the first part being the Thunder building a double digit 113-103 lead just for them to blow it in less than five minutes. The Wolves rallied to take a 121-119 lead with just 17 seconds left but Jordan Bell was called for a delay of game because Chris Paul pointed out how his jersey was untucked.