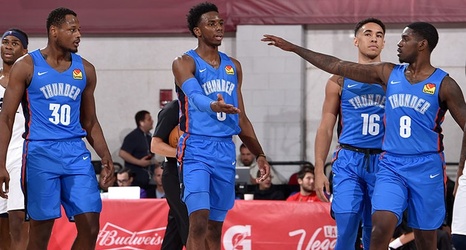 On Thursday evening, the Thunder’s Summer League squad took on the Portland Trail Blazers in its final game of the preliminary round, winning by a score of 92-87 and finishing with a 3-1 record over the first four games.

- Late in the Thunder’s 2018-19 campaign, the Thunder brought in former Oklahoma State University point guard Jawun Evans in on a two-way contract. The 6-foot, 190-pound Evans was a part of the Thunder’s scout team during the postseason series against the Portland Trail Blazers. General Manager and Executive Vice President Sam Presti called Evans, “an interesting player for us to look at,” and over the course of Summer League, the organization has gotten a longer look at the lead guard.