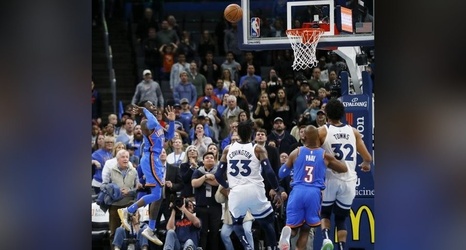 Steven Adams reached back and delivered the most desperate of Hail Marys. Dennis Schroder, playing the role of a receiver fighting for position in the end zone, hauled in the pass over Jeff Teague and flipped it up and in.

All that in a 1.1-second sequence preceded by improbable events.

A sequence leading to a 139-127 Thunder overtime victory Friday night against the Timberwolves.

Karl-Anthony Towns sank a free throw that gave the Timberwolves a two-point lead with 1.1 seconds left. Had he missed, the game would have almost certainly been Minnesota’s with so little time remaining to attempt a viable shot.