Russell Westbrook tops the NBA in points off turnovers 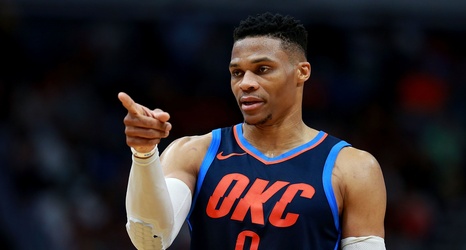 Following critical wins over the Houston Rockets on Saturday and the Miami Heat on Monday, Russell Westbrook sits atop the NBA leaderboard in points off turnovers with 5.2 per game.

The current focus is rightfully on Monday’s Playoff-clinching win, but I want to look back to Saturday. Westbrook’s defense on James Harden ended up stealing the show in crunch-time. His teams’ 22 points off Houston turnovers (either that he or his teammates helped create) was instrumental in getting the win. It’s no wonder such a complimentary game was likely his best performance of the weekend.