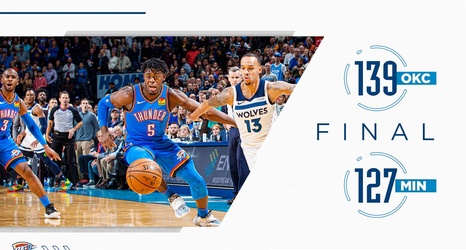 The first 48 minutes of action included some of everything for the Thunder. A game-altering steal from a rookie two-way player, a historic scoring performance from five Thunder players with over 20 points and a full-court laser pass from a 7-foot Kiwi quarterback proved to be enough to keep the Thunder alive and ultimately ahead in a remarkable overtime win against the Timberwolves.

The first twelve minutes of action for the Thunder included 14-21 shooting (66.7 percent) from the field including a perfect 3-3 performance from both Steven Adams and Shai Gilgeous-Alexander. The balanced scoring attack for the Thunder continued in the second quarter with four Thunder players reaching double figures.