An Afternoon Fit for a King 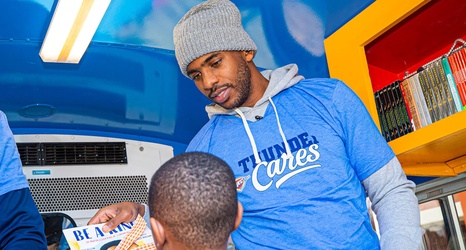 There was only one rule for the second graders at Martin Luther King Elementary before they were allowed to leave the Rolling Thunder Book Bus.

Guarding the entry way into the bus was Thunder forward Danilo Gallinari and guard Chris Paul ready to dish out Thunder wristbands upon exiting. However, Paul had one minor stipulation before anyone could get a wristband: he needed to hear them say, ‘Go Thunder’ and they had to say it like they meant it.

One by one, ‘Go Thunders!