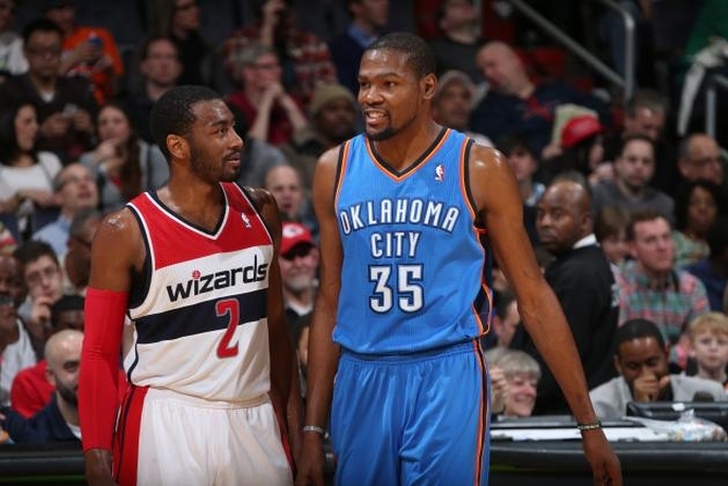 Oklahoma City Thunder forward Kevin Durant knows that his hometown Washington Wizards plan to heavily pursue him in free agency this offseason as the Wizards have publicly stated their intention to do so. However, ahead of the Thunder's game against the Wizards in D.C. on Tuesday night, he told reporters that he finds the pursuit to be "disrespectful" to Washington's players.

"It was cool to see all my family there, but if our team did that to somebody coming in our arena, I wouldn't like it," Durant said, via ESPN. "I'm not saying anything is wrong with the fans, just me, I'm thinking as a player. On the other side, I wouldn't like it. But the fans are going to do what they're going to do. I appreciate all the support that gets thrown our way, but I'm just looking at it as an opposing player, if I was on that team and they came in here and did that, I wouldn't like it. But the fans, they support us, throughout the whole league they make the league what it is, so it's nothing against them, I'm just talking as a player."

Durant, who grew up in Seat Pleasant, Maryland, fueled speculation that he would sign with the Wizards as a free agent when the publicly appaulded LeBron James' decision to "return home" and sign with the Cleveland Cavaliers over the Miami Heat.

Despite all the rumors about his future, Durant insists that he's totally focused on trying to win a championship with the Thunder this year and isn't thinking about what might happen in free agency.

"I just try to go about every day, just focus on one day," Durant said. "I don't think about the future too hard. I'll worry about that stuff when I get there. I've been saying 'I don't know' for a long, long time, but I'm really just focused on our team, happy I'm playing again, and that kind of takes over."

Durant only played in 27 games last season while dealing with multiple foot injuries, but the 2012-13 NBA MVP has averaged 30.1 points and 6.9 rebounds in 37.3 minutes per game this season.