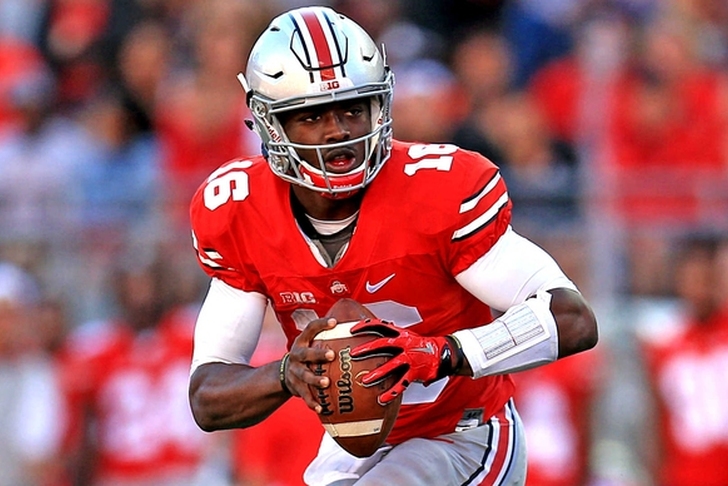 OH-IO! The Ohio State Buckeyes absolutely rolled UNLV winning big 54-21. This was the first time Ohio State faced UNLV and after this game, I think it will be the last. The Buckeyes were winning 37-0 with 8:58 seconds left in the second quarter. They probably could have scored 100 on UNLV, luckily for UNLV's sake the Buckeyes called off the dogs and got their backup player's in the game.

So what did we Learn from this win?

1.) JT Barrett is the Best QB on the Team
Barrett was 12 of 19 for 209 yards and five touchdowns. He found a wide-open Parris Campbell on the first play of the game for a 69-yard touchdown. Barrett passed Bobby Hoying for second all-time in Ohio State's passing.  The Buckeye fans were calling for Dwayne Haskins who also played today and looked alright. He was 15 for 23 for 228 yards two touchdowns and one interception. I think the Barrett doubters will quiet down after this game.

2.) Ohio State's Offense is Legit
An offensive explosion for the Buckeyes. Urban Meyer had the offense ready and it showed today. The Buckeyes racked up 664 total yards of offense with 474 through the air and 190 on the ground. The freshman running back J.K. Dobbins didn't need to a lot in this competition but he looks the part of an every down running back. He carried the ball 14 times and had 95 yards.

3.)   The Buckeyes Defense Line is Nasty
The defensive line for the Buckeyes looked like one of the best lines in football. They really got after UNLV quarterback Armani Rogers sacking him four times and giving the running game fits getting into the backfield. The pressure resulted in two pick six's for the defense. This game at halftime was 44-7 in favor of Ohio State.

Good teams show up every game no matter who they were playing, A statement game for the Buckeyes reminding everyone why they were ranked so high at the beginning of the season.