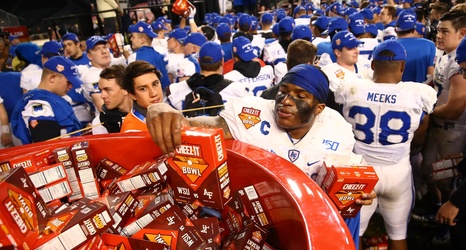 It’s hard to mess with perfection but somehow the Belk Bowl did and hit it out of the park. From 2004 to 2010, Meineke Car Care Center was the sponsor of the bowl game in Charlotte that pitted a couple mediocre teams from the ACC and American conferences. The game became an internet sensation in 2011 when Belk took over as the sponsor. If you were on Twitter on December 27th, 2011, all you saw was Belk, which was used in pretty much every way you could imagine and then some.

Earlier today it was announced that Duke’s Mayo would be taking over as the sponsor of the bowl game.