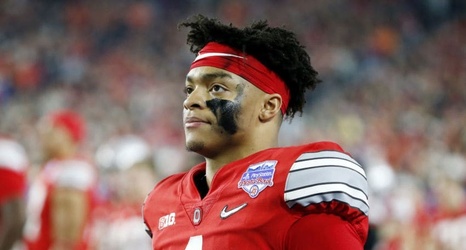 GLENDALE, ARIZONA - DECEMBER 28: Justin Fields #1 of the Ohio State Buckeyes reacts against the Clemson Tigers in the second half during the College Football Playoff Semifinal at the PlayStation Fiesta Bowl at State Farm Stadium on December 28, 2019 in Glendale, Arizona. (Photo by Ralph Freso/Getty Images)

Justin Fields proved to be one of the best players in college football during the 2019 season. Now the QB is a leading candidate to win the Heisman Trophy.

Despite coming up short in the Heisman voting after his outstanding season Justin Fields will be the favorite to win the trophy this season.