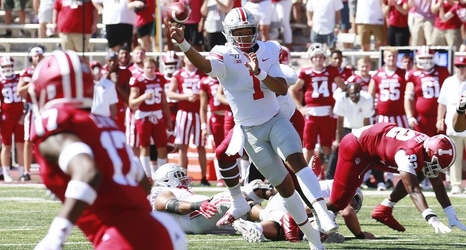 BLOOMINGTON, Ind. – Justin Fields exited the first to games of the 2019 season feeling satisfied with his performance.

After Saturday's game, despite the result being a 51-10 victory against Indiana, he didn't have similarly positive thoughts about his performance.

Fields completed 14-of-24 passes for 199 yards and three touchdowns, adding four carries for 11 yards and a rushing touchdown. He missed a couple targets, though, and didn't seem quite as sharp delivering passes on target – even though his arm strength and evasiveness in the pocket were readily on display.

“I definitely didn't play up to my potential,” Fields said.