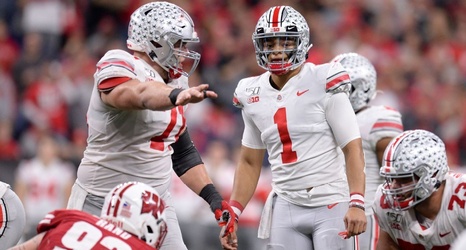 INDIANAPOLIS -- Ohio State played with a lead, usually a huge lead, for almost the entire regular season. But to win a Big Ten championship, the Buckeyes had to show they could rally.

Behind quarterback Justin Fields and an energized defense, Ohio State erased a 21-7 halftime deficit against No. 8 Wisconsin and outscored the Badgers 27-0 in the second half of the Big Ten championship to prevail 34-21. The top-ranked Buckeyes claimed their third consecutive league title and secured a College Football Playoff spot for the first time since 2016.