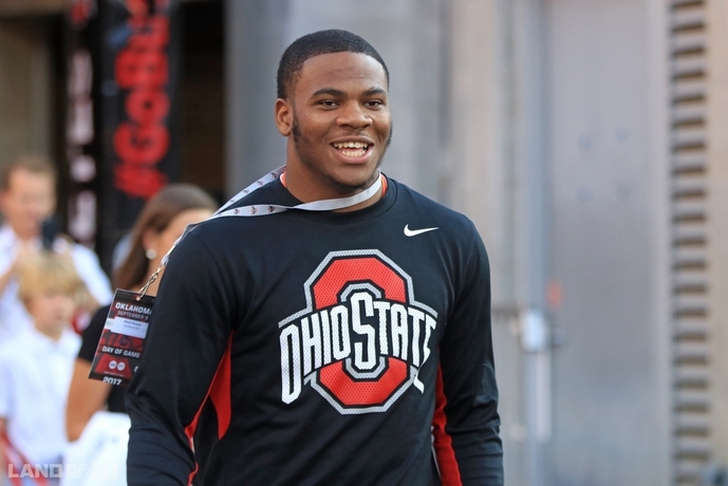 2018 five-star DE Micah Parson will not be signing with Ohio State tomorrow following self-reported recruiting violations that required the Buckeyes to stop recruiting him. The violations occurred on his official visit to Columbus on September 9th for the Oklahoma game, and stem from violations relating to interactions with ESPN's College GameDay.

As a result of the infractions, Ohio State declared him ineligible for an unknown amount of time and will no longer recruit him.

Due to FERPA protection, Parsons is unnamed in the self-reported violation records and is referred to as a “2018 prospective student-athlete.” But he is believed to be the recruit implicated in the report because he was photographed on the College GameDay set.

From one Buckeye to hopefully another Buckeye. Enjoy the time down there g pic.twitter.com/YISInMXJ9g

When Parsons was on a campus tour led by football recruiting assistant Ed Terwilliger, the recruit met with former Ohio State players Kirk Herbstreit, and Eddie George plus College GameDay analysts Rece Davis and Lee Corso. The issue here is, student-athletes are not allowed to "have contact with members of the media associated with former student-athletes.”

“As such, a violation of NCAA Bylaws 13.10.1 and 13.10.2.4 occurred, as members of the media may not be present during an institution’s recruiting contact with a prospect and a prospect may not participate in team activities that would make the public or media aware of the prospect’s visit to the institution.”

Terwilliger received a letter of reprimand and was suspended one game. Following the Buckeyes self-imposed punishments, the NCAA determined “no further action should be taken by the NCAA enforcement staff.”

Ohio State is unable to comment due to Parsons not yet having signed a letter of intent. A ceremony is scheduled for Wednesday morning where Parsons is widely expected to sign with Penn State.