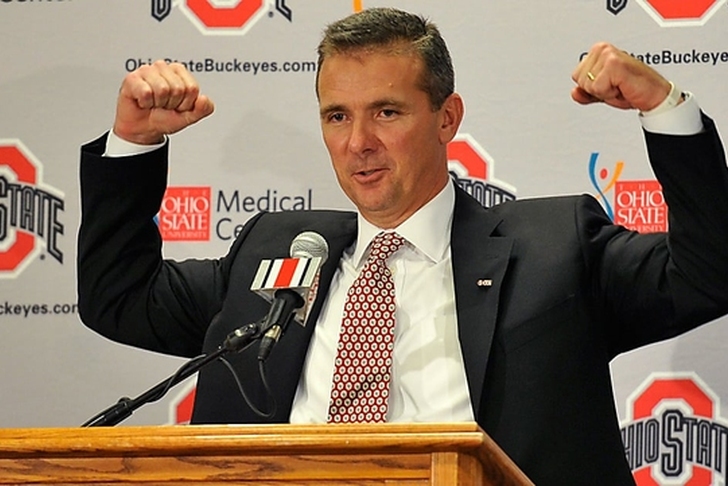 Ohio State head coach Urban Meyer discussed everything surrounding the Buckeyes during his weekly appearance on the Big Ten coaches conference call on Tuesday, about facing Michigan, recruiting and the magnitude of the Ohio State and Michigan rivalry.

The transcript of quotes from Meyer's Big Ten press conference is below. The general questions are bolded, with Meyer's answers in quotes below.

Baker Mayfield is in the final two weeks of the season and is looking like the favorite to win the Heisman, you had a player who also faced a lot of scrutiny who won the Heisman in Tim Tebow, how do you recall Tebow handling the attention.
"I have to apologize that I am so focused on this game. The year he (Tebow) won it he was the golden child. Then you know the year after it was if he couldn't do anything right, which is not true he played great. He handled it very well, he has always been extremely focused and a balanced young man."

What has it been like preparing and coaching against Baker Mayfield the last two seasons?
"We're playing the team up North."

As you get ready for Michigan, Maurice Hurst their nose guard how much does he jump out on video to you guys as you prepare for these guys (Michigan).
"He one of the best players if not the best player. He's outstanding and has been that way the last couple of years and we have a lot of respect for him."

What is the update on Dante Booker's status for this week?
"He will be cleared which is good news, he is going to practice today."

In this environment in college football where guys transfer and leave for the NFL early when you go in and recruit a quarterback do you envision them being a multiple-year starter for your program?
"Certainly, that's what you hope to have happen., and obviously, things happen along the journey. which is exactly what it is and but that's certainly the way you go out and recruit, you try and take one out of each class and develop them and have good competition and compete for the spot."

With J.T. making the fourth start against Michigan obviously maybe not now but when you look back on that will you be kinda amazed that you had a quarterback go four times against them?
"Yea it doesn't happen very often, I think this is going to be a critical game for his career."

You have been very successful in rivalry games regardless of where you've coached. I'm just curious if you have used the same formula here at Ohio State in preparing for that or is it different due to the magnitude of this rivalry.
"I actually learned about the rivalry here and I took that with me on my journey to different stops. I am a big fan of rivalries and the pageantry of college football which I think separates rivalries from other in college football. I have always had great respect for rivalries."

Is there one common denominator when you have won your rivalry game that stands out you have gotten from a players perspective or you as a coach?
"No, I think it is just the focus and attention to detail and I think the big "R" word, respect that you have for it. and understand that this rivalry is there well before them and well after them and same with our coaches. We just have to do the best we can to respect them and prepare the best way we can."

What concerns you the most about Michigan's offense?
"Their run game, their tailback is an outstanding player and their interior offensive line is really, really good and I think they do a very good job of moving and shifting and trying to create gap issues for you, and we are spending an incredible amount of time on that."

What is the challenge not knowing who their quarterback is going to be and how it effect preparation?
"I don't think but you have to check with Greg and our defensive staff more than myself but I think they are all similar and very good players and it's not like they drastically change their system depending on who is in there."

Special Teams is always a big part of a rivalry game and I am just curious how you're feeling about your special teams now compared to earlier in the season when you guys have struggled.
"Much better and obviously this will be a great challenge, their players are all over the place, their kickoff unit is outstanding, how they come after they are very aggressive on a lot of their punt blocks and we are going to spend getting ready for it because you're right this is a big part of this game that will likely lead you to a victory?"

You mentioned this would be an important game for J.T, and has Michigan for the fourth time and has the chance to go 4-0. What are you hoping for to see out of him this week?
"He is a man's man, he's been that way since we've known him and he continues to mature and he was a very mature person back when he was a freshman. His preparation is legendary around here as far as the amount of time and effort that he puts into practice and that's what we expect."

Your recruiting record kinda speaks for itself but I'm curious for these rivalry games, does winning these games have any kind of lasting recruiting implication or not so much?
"I think so, I think it does. I don't know if it's as big as everyone makes it out to be but I certainly think that it has a place in the recruiting world."