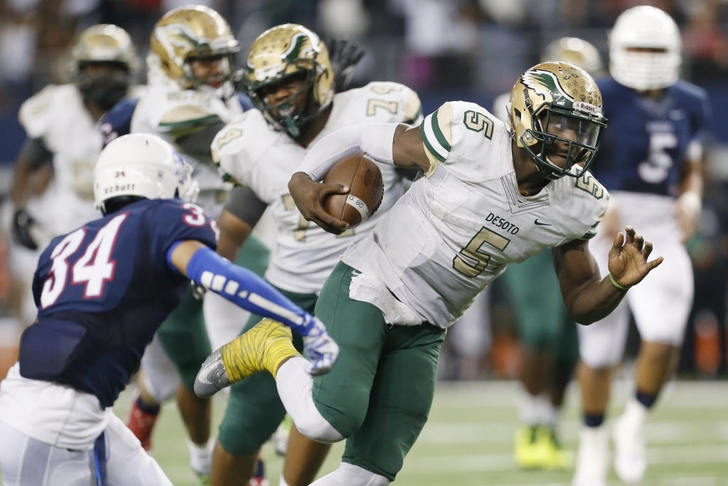 The Ohio State Buckeyes currently have a stacked depth chart at quarterback with the likes of Cardale Jones, J.T. Barrett and Braxton Miller. They are set to add another quarterback to the mix in 2016, with the verbal commitment of four-star recruit Tristen Wallace.

I'm glad to Officially announce that I have Committed to The Ohio State University ! #BuckeyeNation ⭕️ pic.twitter.com/YGUnK8CSCx

The 6'3" dual threat quarterback out of DeSoto, Texas, is regarded as one of the top QB's in the 2016 class. "The biggest reason I chose Ohio State is because of coach Meyer," Wallace told 247Sports.com. "He truly, genuinely cares about my well being and my life without football."

Wallace chose Ohio State over the likes of UCLA, Nebraska, Texas and TCU, among others.

Meyer has a quarterback battle on his hands heading into 2015, but could be without all three current Buckeye quarterbacks after this year, with Miller heading into his senior season and Jones and Barrett potential NFL Draft candidates.

Wallace has a chance to step in and see significant playing time as a freshman in 2016, just as Miller (2011) and Barrett (2014) did in their respective freshman seasons.