Wrestling with NCAA snub, Ohio kicks off WNIT with win 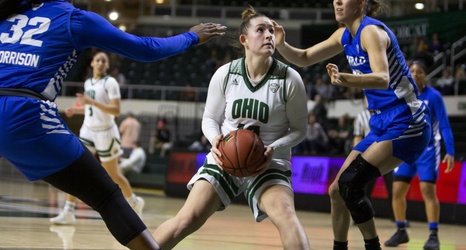 The first round of the Women’s National Invitation Tournament (WNIT) began in the Convocation Center on Thursday, and the Ohio Bobcats didn’t want to be there. To be sure, the Bobcat women were not apathetic about the game and didn’t show a lack of effort; it just wasn’t the tournament they wanted to play in.

Ohio (28-5) was one of the first four teams to miss an invite to the NCAA Tournament. A victim of the selection committee’s decision to snub the Bobcats, the women had to settle for the WNIT.

While the WNIT is not where Ohio wanted to be post-season, playing in this tournament and advancing as far as possible remains important for the program.