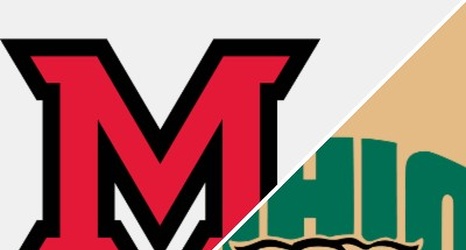 ATHENS, Ohio -- Nathan Rourke threw for three touchdowns and ran for three more, and Ohio pulled away to defeat rival Miami 45-28 on Tuesday night in the 94th Battle of the Bricks.

Rourke completed 21 of 33 passes for 294 yards and ran 10 times for 54 yards as the Bobcats (7-2, 4-1 Mid-American Conference) improved to 11-2 in the rivalry game under Frank Solich after winning just 29 before his arrival.

After the RedHawks (3-6, 2-3) tied the game at 28 on Billy Bahl's third touchdown pass to James Gardner late in the third quarter, Rourke quickly answered with an 11-yard TD pass to Jerri Marhefka.