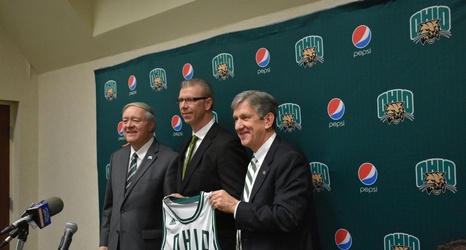 New Ohio University men’s head basketball coach Jeff Boals, center, is re-introduced to Athens at an event Monday at the Convocation Center. OU President Duane Nellis is on the left and Athletic Director Jim Schaus on the right. Boals wore the number 45 jersey when he played for the Bobcats in the 1990s. Photo by Conor Morris.

Ohio University announced Wednesday, March 13, that it had begun a search for new men’s basketball coach to replace coach Saul Phillips, whose contract was not renewed. By Sunday, a new coach had been announced, and this Monday Jeff Boals was introduced at the Convocation Center as the 19th head coach of the Ohio Bobcat men’s basketball program.