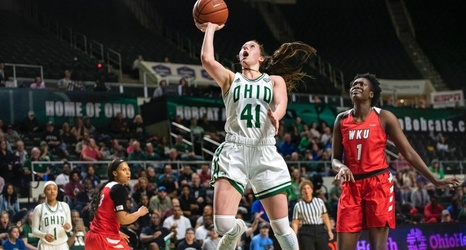 Bob Boldon nestled the headset over his ears and looked down at the floor of the Convocation Center.

There, he saw the ‘Marching 110’ playing proudly. He saw his players celebrating a win and soaking in every second. He saw fans applauding and issuing an appreciation for the Bobcats he hadn’t seen all season.

“Awesome,” said Boldon minutes later, without a hint of his trademark sarcasm in his voice.

You can say the same about his Bobcats.

The Ohio University women’s basketball team, which never trailed in the second half, posted a 68-60 win over Western Kentucky on Thursday night inside the Convo.