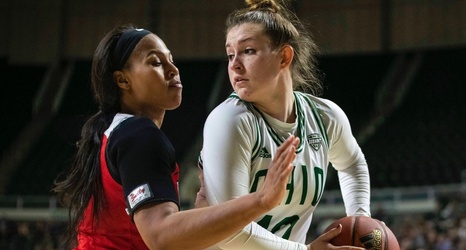 Whatever it is, the Bobcats are going to need all of it to keep their season alive.

Ohio (30-5) plays at Northwestern (19-14) in the quarterfinal (aka regional final) round of the 2019 Women’s NIT Tournament on Saturday night. Tip off is set for 7 p.m. ET from Welsh-Ryan Arena in Evanston, Illinois.

It’s a rapid-fire turnaround for the Bobcats. Ohio vanquished Western Kentucky in the third round on Thursday night in the Convo. Less than 12 hours later, the Bobcats flying commercial to Chicago.