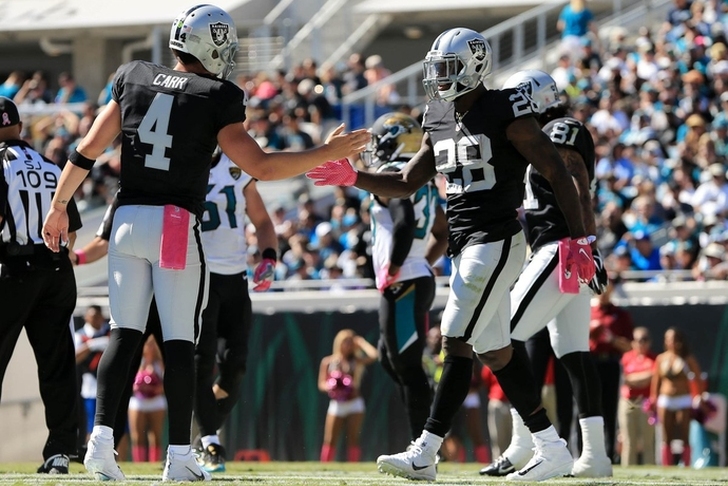 Thanks to a solid defense, enough offense and another strong game from Michael Crabtree, the Oakland Raiders are now 5-2. The Raiders picked up a 33-16 win over the Jacksonville Jaguars on the road Sunday, in a game the Jags were favored. The Raiders didn't exactly light up the Jaguars, but they played well enough to pick up a win.

The Raiders continue to look like a playoff team, even if they do have some flaws. Here's what we learned from the Raiders 33-16 win

3. The Raiders' Run Game Isn't Quite There
At first glance, the box score 34 carries for 144 yards and two TDs isn't a terrible stat line. After all, 4.24 yards per carry is pretty solid. But that's a bit deceptive. Take away the botched punt that went for 27 yards, a pair of runs for WR Johnny Holton that went for 25 yards and four yards of scrambles for Derek Carr on four carries, and the Raiders are at 27 carries for 88 yards. That's just 3.26 yards per carry. That's not going to get it done, even if the Jags have a decent run defense. The Raiders' passing attack is still sharp, but a consistent run game would make this offense truly dangerous. As whole, this offense is really good. But the running game is holding it back from being truly great.

2. The Oakland Pass Defense Is Improving
Raider fans haven't been too pleased with the defense, particularly the secondary. Sunday's game could help calm those worries. The Jaguars have struggled on offense this year, but that doesn't diminish what Raiders defense did today. They held the Jags to just 4 of 13 on 3rd downs and forced three turnovers. Two of those were INTs, as Blake Bortles struggled to a meager 23 of 43 for 246 yards and a TD. The pass defense has slow improved after a terrible start, and it's looking more like the defense the Raiders thought they would have after an offseason of upgrades.

1. Raiders Still Need Working Finishing Games
We've seen this several times this year. The Raiders jump out to an early first half lead, but fail to put away the opposing team when they have the chance. The Raiders nearly let the Jags comeback, as Jacksonville did cut the lead to 10 with a few minutes left. While Oakland did get a nice touchdown drive from Latavius Murray to help seal the game, this was the type of game the Raiders could have pulled away comfortably much earlier. This is a very good Raiders team, but they still look like a young team at times. That's understandable, but if the Raiders want to make a deep playoff push, they need to close out games more consistently.

BONUS: Gus Bradley's Seat Is Getting Hotter
The Jaguars have been patient with head coach Gus Bradley, since he took over a major rebuild. But patience is wearing thin and a 2-4 start to the season hasn't helped things. Blake Bortles seems to have regressed this year and that's a worrisome sign. And this was an embarrassing loss. There were 14 penalties, two players got ejected and the offense continued to struggle. There's still time to turn things around, especially with the Titans on deck, but time is running out on Bradley. He needed to show improvement over last year's 5-win season. So far, the Jags haven't shown that.