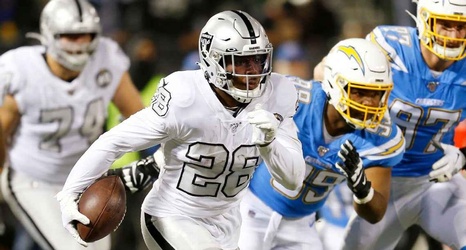 OAKLAND, Calif. – Who says youth is wasted on the young?

For the Oakland Raiders, it was on full display in a 26-24 victory over the Los Angeles Chargers Thursday night. Rookie running back Josh Jacobs scored the winning touchdown on an 18-yard run with just over a minute remaining, his seventh touchdown of the season.

Consider: while undrafted rookie fullback Alex Ingold has six touches this season, all six have gone for first downs, including his first career TD. As such, 12 Raiders TDs have been scored by rookies thus far, double the next closest team (Washington, with six) -- Jacobs (7), tight end Foster Moreau (3), wide receiver Hunter Renfrow (2) and Ingold (1).