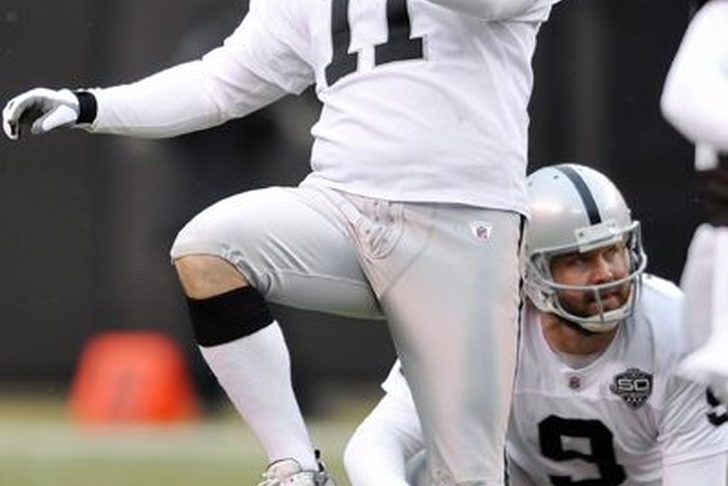 After a promising start that saw the Raiders strike first in the opening minutes, thing settled down over the rest of the first quarter.

The second quarter began with a Raiders miscue - a snap went right by Terrelle Pryor, and although he showed great awareness to scoop it up and roll out to try and make something out of nothing.

Marquette King sent a booming punt down deep into Jacksonville territory, and the Jaguars began a drive from their own 13. Jacksonville put together their most cohesive drive of the season to date, but Oakland's defense bent without breaking and forced the Jaguars to settle for a field goal with 7:45 remaining in the half.

Oakland's next drive featured two huge runs from Pryor and Darren McFadden - a 27-yard scramble that featured incredible acceleration from Pryor, and then a bruising dash forward into Jaguars territory by McFadden.

The drive stalled, and Sebastian Janikowski came out to attempt a 35-yard field goal. Janikowski, one of the NFL's elite kickers, uncharacteristically missed a 50-yarder last week, and this shorter attempt seemed like a foregone conclusion. Shockingly, Janikowski sent the kick wide right, his first miss from under 40 yards since 2010.

The Jaguars took over at their 25, but once again Oakland's defense came up big. On third down, Jaguars QB Chad Henne was sacked by Christo Bilukidi, and Jacksonville punted once again with 2:50 remaining in the half.

With the half winding down, Oakland drove up to the Jacksonville 38, but were unable to make their way further. Janikowski walked out for his second FG attempt of the day - a 46 yarder that he drilled to put the Raiders up 10-3 at the end of the half.

First half MVP: The Oakland running game. Pryor, McFadden, and Marcel Reece all averaged over 5.9 yards per carry, and the three combined for 91 rushing yards in the half.