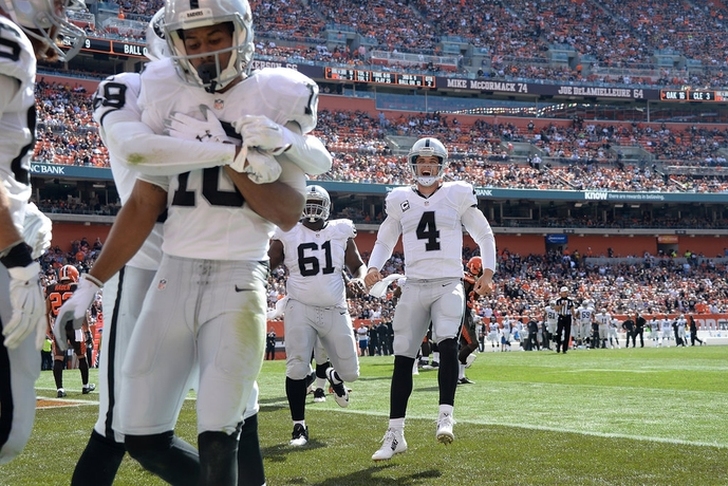 The Oakland Raiders have a winning record after beating the Browns last weekend, and now have a winnable road game in Chicago against the Bears. Here are three reasons why they'll win and improve to 3-1 on the season:

3) Latavius Murray is a legitimate No. 1 running back

The Raiders doubled down on their usage of Murray on Sunday, upping his touches considerably to 27. It worked, as Murray gashed the Browns for 149 all-purpose yards (139 rushing) and announced himself as both a worthy lead back and a fantasy football darling. After suffering through one of the worst overall rushing seasons in modern franchise history last year, Latavius Murray is a breath of fresh air who opens up the offense for starting QB Derek Carr. Expect Oakland to give him a large amount of carries again against a soft Bears defense.

2) Jimmy Clausen is starting for the Bears

Jay Cutler is expected to miss Sunday's game, meaning Chicago will be starting Clausen under center again - which is a great thing for the Raiders. He passed for just 63 yards and averaged an embarrassing 3.7 yards per attempt in Chicago's loss to Seattle last weekend and was sacked twice. The Bears failed to put up a single point with him leading the offense, and they figure to struggle mightily again.

After Oakland's blowout loss to the Cincinnati Bengals in Week 1, there were plenty of critics out there ready to nominate replacement options for the second-year quarterback. That was VERY premature. Carr lit up the Ravens last week in the team's 37-33 home shootout win and followed it up on Sunday by throwing for 314 yards and two scores against a shellshocked Bengals defense. He's the best sophomore quarterback going, bar none, and the best QB the Raiders have had in tow since Rich Gannon.