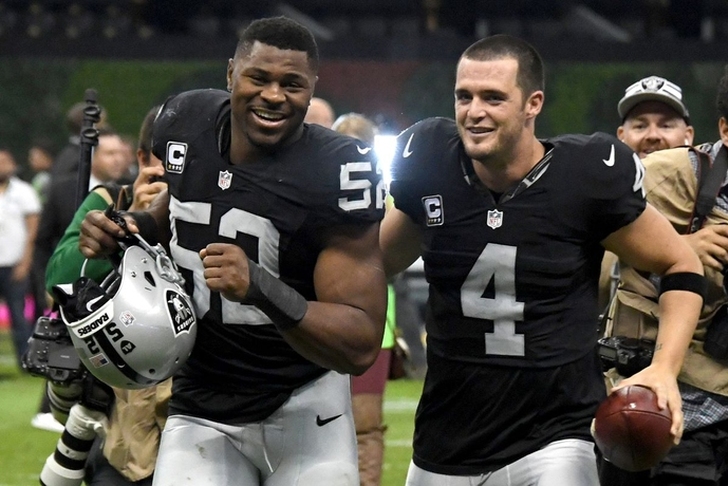 The Oakland Raiders were one of the biggest disappointments in the NFL this season, posting a 6-10 mark. They have holes they need to fill if they want to make it back to the postseason next year as expected, and while they've made several notable moves this offseason, they need to make a few more. Here are three more moves the Raiders need to make if they're going to make the playoffs next season:

1) Draft a linebacker
Linebacker Khalil Mack is the muscle on the Raiders defense and is arguably the most important player on the team (minus quarterback Derek Carr). Yet, he can't do it alone and the Raiders are in desperate need of adding a linebacker to this defense. The Raiders played undrafted free agent rookie Nicholas Morrow for most of last season and that needs to change in 2018. Adding a talented player such as Georgia's Roquan Smith or Virginia Tech's Tremaine Edmunds to replace him would be a huge upgrade to this defense.

2) Find a starting caliber cornerback
The Raiders need help at the cornerback position after cutting both of last year's starters in David Amerson and Sean Smith, and while they've signed both Rashaan Melvin and Shareece Wright, Oakland needs more help. There are a number of quality players in the draft as well as in free agency.

3) Get more wide receiver depth
Entering the 2017 season, the Raiders were believed to have one of the best wide receiver duos in the league with Amari Cooper and Michael Crabtree. Both receivers struggled, which impacted the play of Carr and the entire offense and now Crabtree is no longer on the team. While the addition of Jordy Nelson will help, he certainly isn't the player he once was.

This offense could use one more legitimate weapon, which the Raiders will likely find in the draft. Oklahoma State receiver James Washington, the best deep threat in the 2018 draft class, makes a lot of sense as a mid-round pick.