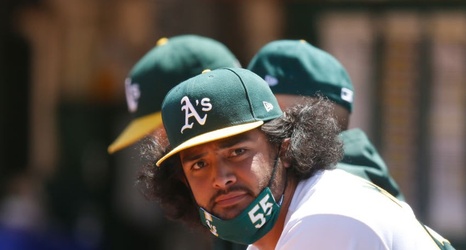 OAKLAND, CALIFORNIA - MAY 20: Sean Manaea #55 of the Oakland Athletics looks on from the dugout during the game against the Houston Astros at RingCentral Coliseum on May 20, 2021 in Oakland, California. (Photo by Lachlan Cunningham/Getty Images)

The Oakland A’s (37-26) swept the Arizona Diamondbacks (20-43) in a two-game inter-league series behind stellar pitching throughout both contests.

The A’s used a five-run rally to keep the D-backs away as they took game one behind a solid outing from Chris Bassitt on the mound.

Already down 1-0 in the bottom of the fourth, Jed Lowrie led off with a single and advanced to second on a Matt Olson walk.