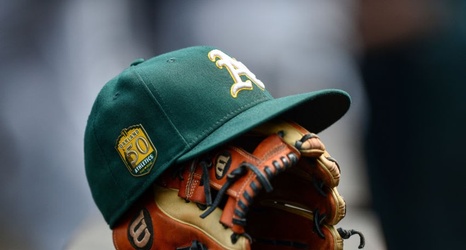 DENVER, CO - JULY 29: An Oakland Athletics player's hat and glove rests in the dugout during interleague play between the Colorado Rockies and the Oakland Athletics at Coors Field on July 29, 2018 in Denver, Colorado. (Photo by Dustin Bradford/Getty Images)

According to reports, the Oakland A’s are considered to be one of the two frontrunners to land Cuban outfield prospect Luis Pino.

The Oakland A’s have a reputation for refusing to spend money. That reputation is partially accurate – they typically do not go after the top free agents and trade away those players whose salaries get too high via arbitration.