Matt Chapman breaks out of slump, saves A's season on one clutch swing 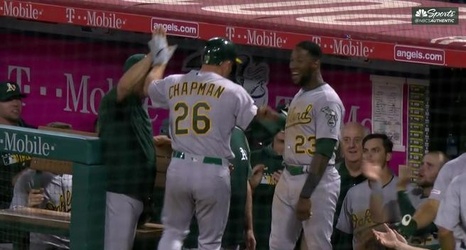 Wednesday night was shaping up to be a disastrous one for the A's.

Oakland had already left 11 runners on base through eight innings, going just 1-for-14 with runners in scoring position. The team was clearly pressing, down 2-1 in the ninth and just two outs away from losing the top wild-card spot to the Rays, who had already won their game against the Yankees.

The A's third baseman stepped to the plate with one out and Marcus Semien on second base, facing Angels closer Hansel Robles. Chapman wasted no time, demolishing the very first pitch he saw 436 feet to center field for a two-run home run, and the A's rallied for a thrilling 3-2 victory.