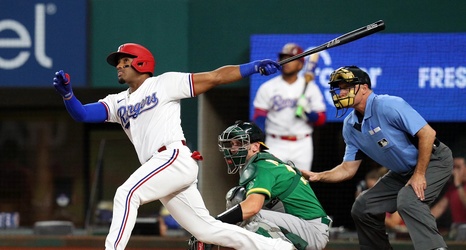 Talk about a case of the Mondays.

The Oakland A’s fell behind early and never recovered in an 8-3 loss to the Texas Rangers, opening their four-game series in Arlington with a whimper.

This contest was over almost as quickly as it began. Starter Frankie Montas got ambushed for five runs in the 1st inning, and the A’s lineup never got much of a comeback going. They chipped away a little bit, but Texas added some insurance to put it out of reach for good.

The opening rally began with a single that maybe should have been ruled an error on fill-in third baseman Chad Pinder, but there wasn’t any question about the hits that came next.