Chad Pinder leaves game after hit by pitch in head 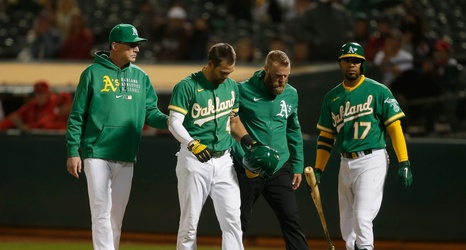 The Oakland A’s had a scary moment during their game against the Los Angeles Angels on Monday.

In the 7th inning, right fielder Chad Pinder was hit in the head by a pitch and exited the game.

To make matters worse, in Pinder’s attempt to get out of the way his helmet was jarred out of place, so the ball appeared to miss it entirely and peg him directly in the back of the head. He fell to the ground and kicked his legs in obvious pain, but a few moments later he was able to stand up and walk off the field under his own power.