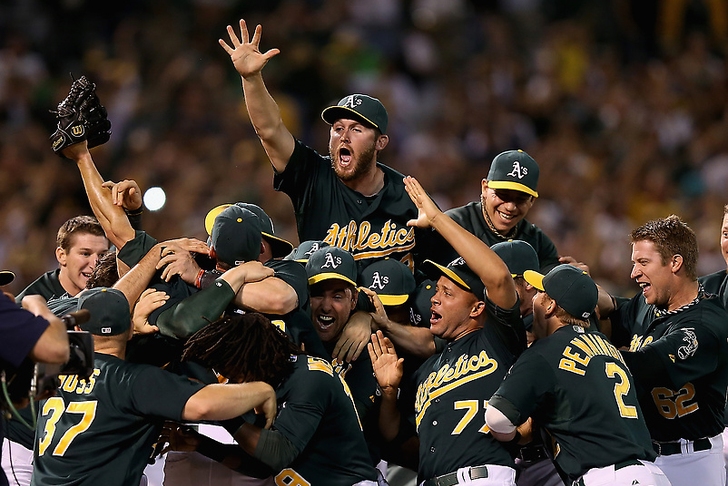 Over the weekend, the A's made the Tampa Bay Rays' offense look eerily similar to the A's offense throughout the majority of August--inefficient, slight, and full of obvious holes. With all due kudos to Jarrod Parker, Sonny Gray, and homerun-or-strikeout gambler du jour A.J Griffin, the Tampa Bay Rays' offense decided that bats were unnecessary for emulating major league hitters, going 5 for 26 with runners in scoring position (2 for 17 in the final two games.)

So, the Athletics are in a solid spot as we head into the actual baseball season of September/October, 2 1/2 games up on Tampa for the 1st Wild Card spot (and home-field advantage in the one-game loser leaves town first blood cage match,) and a single game behind those very large men from Texas with money and power and scary, scary, SCARRY starting pitching.

So now, with each team having just 26 games, or barely under a sixth of the season left, it is very much time to dust off our Miss Cleo hats and pearls, purchase a 1-900 number and predict the future. Let's break it down, shall we?

Offense: Last year, this would be a no-brainer. The Oakland A's found ways to hit barely above the Mendoza line, and make the smattering of hits that they sprinkled on the field count. The Rangers were stacked from gill to gill with power and average threats, which just happened to peter into vapor during the stretch run.

However, despite losing Nelson Cruz and the Dr. Jekyll version of Josh Hamilton, the Rangers still have one of the best 1 through 5's in baseball, and strikeout 15% less than the A's. This is enough for a solid, if unspectacular edge.

Starting Pitching: Yu Darvish is worth a couple of teams' entire starting rotations, plus the Pog collection of a 1990s pre-teen. The rest of Texas' rotation is a notch above solid, with Garza and Holland being a very underrated number two and three. Martin Perez has won 5 straight starts, which makes him the first Ranger rookie to do so. Travis Blackley is...umm...Australian.

The A's rotation, while lacking the absolutely electric number one pitcher that Darvish has become, matches up more than you would guess on first glance. The A's rotation boasts a 3.86 ERA, third best in the A.L. Texas, albeit with a relatively svelte 3.95 ERA, sits at number seven.

The A's starting rotation is tied for fourth in the A.L. in suppressing walks allowed, while Texas is 11th. The A's, especially with Coco Crisp and Brandon Moss in clutch comic book hero mode, are too of-the-moment to let the free passes slip by in the remaining six games these teams play against one another. This is a surprising push, based solely on the paranoia that Yu Darvish might clone himself before October.

Bullpen: The numbers lean toward the Rangers in ERA, but everything else comes down to who you want going in the 7th, 8th, and 9th with a one run lead.

I trust Ryan Cook and Sean Doolittle. Ryan Cook's Houdini act in Friday's win over the Rays was step seventeen this year in the cementing of his maturation process. Sean Doolittle throws darts and overpowers lefties with glee. Grant Balfour is Mel Gibson in Braveheart. This is a good thing.

Joe Nathan is a Hall-of-Famer in my eyes. Joakim Soria, Tanner Scheppers, and Jason Frasor have been revelations, all posting ERAs of 3 or lower. However, here comes the walks again. A's relievers have walked 15 percent less batters in a relatively even amount of work. Those extra one to three walks per game by the bullpen are KILLERS in pennant races. The slight edge belongs to Oakland.

Oakland: 26 games left with a whopping 20 games against teams with records under .500. Seven games left against Minnesota, along with six against the Angels, and four against the ghosts of Houston Astros future.

Texas: 26 games left with 10 games against the lower echelon of the American League. There are series still to be had against Pittsburgh, Tampa Bay and a Kansas City team fighting desperately to break .500.

The Bartolo Colon pills-or-poke controversy was really nothing on the impact scale for the diverted attention of the Bay Area media. Bob Melvin has lucked out to be able to contain things to guys one through twenty-five, creating a seamless whole built on the very aspect that it is absolutely counterproductive and unnecessary for the A's to have an actual bonafide superstar.

Ron Washington has to deal with a much more unforgiving market in the suddenly baseball-savvy Dallas/Fort Worth market. Nelson Cruz's suspension hangs over this team like a dog fart, and Washington may not be able to survive another failure-to-perform in the vein of last year's fade to black.

The Rangers may be marginally better on paper. But, the A's get to play the underdog even while having the knowledge that they can slay the mighty Rangers.

Oakland will go 17-9 in their final twenty-six games, splitting the six remaining contests with Texas 3-3. Texas' schedule will catch up to them, going just 11-9 against non-Green and Gold opponents and 14-12 overall. The A's will win the AL West by two games, doubling their margin of victory from last year.