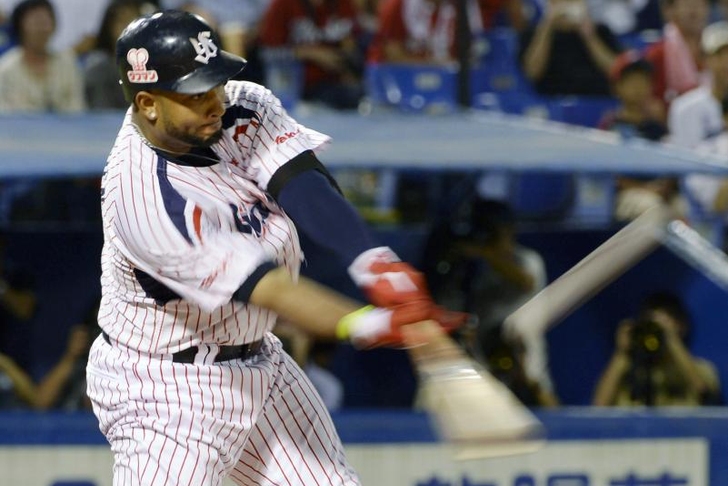 I am writing this during perhaps one of the most excruciatingly long, stressful, and dynamic baseball games I have ever witnessed in my two-decade span as a relatively cognizant and extremely obsessive baseball fan.

As of right now, a seven-run lead against the Rangers is down to one, and the 33,212nd pitcher has entered the game. Instead of peeing my pants and flapping my arms like a penguin, I have decided to shift my focus to the relatively blissful-by-comparison 2013-14 Hot Stove. (note: At the time of publishing, Oakland closed the door on the fighting Washingtons, and the A's have extended their lead to 4 1/2 in the AL West.)

Rumors have it that former Major Leaguer, and current Japanese idol Wladimir Balentien will be plying his trade on American (and/or Canadian) soil once again next year. Balentien tied the Japanese season-season home run record  on Wednesday, September 11th with his 55th round-tripper. This ties him with revered icon Sadaharu Oh (1964) and former MLB players Tuffy Rhodes (2001) and Alex Cabrera (2002).

The fun part: Balentien has 21 games left to shatter the mark.

Now, Japanese baseball is beset by controversy over a Superball-esque baseball which has been flying out of Japanese ballparks at an insane pace. Balentien may just be the one-dimensional beneficiary of a "don't juice the players, juice the ball" era in Japanese baseball. Japanese officials have even copped to the doctoring, without as much as a Seligism or two.

However, Balentien could still bring an extremely lively bat to the table, slotting him into a similar pay rate and role as Seth Smith, without (perhaps) the inconsistency. Rumors are fickle by nature, so we will be keeping an eye on this as the season wraps up and intentions become clear.