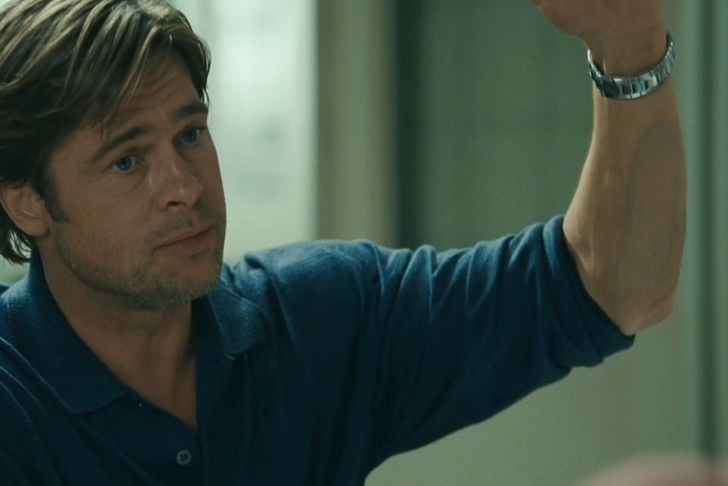 Brad Pitt will never play me in a movie.

I will not be named one of the top ten sports executives of an entire decade.

And unless my plea from this next video is heard up on high, I will not be spearheading a statistical revolution that completely changes the way an entire sport is consumed and perceived.

(I forgive you if you're now trolling through '80s power ballad playlists on YouTube...see you in a bit.)

So, in summary, take what I say next with a grain of salt--

Billy Beane has gone completely and utterly out of his well-coiffed gourd. Or so it would seem.

With a solid influx of revenue coming from the re-upping of Major League Baseball's national television contracts, Lew Wolff went out and bought himself a new wallet with an A's logo on it. And, weirdly enough...he's opened it a little bit.

What exactly has been gained and lost from this moderate binge in the free agent marketplace?

Well, it hinges on how much of an upgrade you think Jim Johnson is from Grant Balfour at the back of the pen. Jim Johnson is six years younger than Balfour, and with the now-obvious health issues going on in Rageville these days, he's probably a safer bet to last a full season unscathed.

The A's gave up the enigma that is Jemile Weeks and an expendable catcher in David Freitas for Johnson, so the cost from that perspective is relatively low. Johnson is a one-year rental at a what-used-to-be-prohibitive $6.5 million, with the possibility of him becoming a valuable trade chip if the season goes south by mid-summer.

However, despite taking the AL saves crown for the second straight year last year with 51, Johnson regressed a bit back to the mean. His WHIP inflated from a Eckersley-esque 1.019 in 2012 to a good but not great 1.280 in 2013. His WAR decreased from 2.4 to 1.5, which is more a byproduct of how the role of closer is overstated (and overpaid for) in the modern era.

So, there's the first huh? what? why? how? Billy Beane moment...spending not-so-small-market funds on a closer who just hit his 30th birthday, and is showing possible signs of coming down to Earth.

And, I don't know about you, but I don't want to see Curt Schilling's half-laughing, half-concerned face on camera if Johnson gets off to a rocky start.

So what, right? The A's need to take chances to succeed in the "pit." Johnson could easily return to form. However, that one move isn't the reason to ask about Billy's medication intake. There's all of these to assess as well, and they aren't all about the money:

- Giving up on OF Michael Choice for OF Craig Gentry and a project in SP Josh Lindblom. Craig Gentry was quietly just under a 4-win player in WAR with a solid .280 average in 2013. However, his lack of pop will only be further exacerbated by the cavern that is the O.Co Coliseum. In return, the Rangers get a 23-year old former first-round pick with just 18 MLB at-bats to his credit. Choice's ceiling is pretty damn high, while Gentry is pretty much a known quantity at 30 years old. Josh Lindblom's ERA has ballooned each season he has been in the majors, and there are real questions about his stuff.

- Giving Scott Kazmir $22 million over two years, while letting Bartolo Colon join the Mets for $20 million over the same span. Listen...I get it intellectually. Kazmir is just 30 years old, and took on his biggest workload since 2007 last year at 157 innings. Bartolo Colon is 40 years old, and was looking for a one-year contract in the $15 million range at first blush. Yet, the fact of the matter is Bartolo Colon was a dark horse Cy Young candidate for the majority of last season, while Kazmir settled in as a serviceable starter who looks far removed from his two All-Star appearances. Time will probably prove me wrong, especially if Kazmir remains fully healthy, but $11 million a year for a borderline #2 starter is the antithesis of Billyball.

- Trading away one of their most underrated bullpen pieces in LHP Jerry Blevins to Washington for OF prospect Billy Burns. I am surprised there wasn't a bleep-ton more Twitter backlash for this move from the Green and Gold faithful. Blevins' WHIP was sub-1.1 in both 2012 and 2013, and he was consistently the "all situations, all of the time" guy in the front of the bullpen. It always seemed that no matter how much Cook, Doolittle, or Balfour struggled at times, Blevins was a consistent rock that the A's could go to in order to get outs. Burns adds some (very speedy) depth at the top of a minor league system that needs it, but the Nationals may have picked up one of the more under-the-radar steals of the offseason.

So, there you have it. Billy's lost it, right? It's time to get him to sign Brangelina head-shots to bring in some 2015 free agent money while he still can.

I told you. I'm probably an idiot. Take all of my fear for what it is...fear.

Because for all of the confusing moves of this offseason, the A's still came out from under underachieving OF Chris Young's egregious salary.

The Brett Anderson injury watch is now over as well, as the A's traded him to Colorado for a bullpen/spot starter piece with very good upside potential in former first round pick LHP Drew Pomeranz.

Add in the upcoming chants of POOOOOOOONNNNN-TOOOOOOOOOO from the right-field bleachers, and things are still fine and dandy like sour candy in Stomper-land.

Billy has been questioned before, and will be questioned again and again. I'm guilty of doing it 212 times per year, but mainly it just boils down to being too dense to understand the methodology of his genius before the results come in.

In the end, Billy remains a top 1% mind in a top 1% field...even if he makes us lose all of our damn minds in the process.