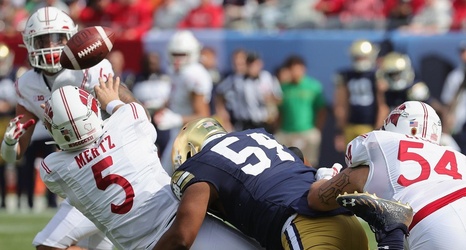 Chris Tyree’s 96-yard kickoff turn early in the fourth quarter erased a 13-10 deficit and triggered a 31-point scoring barrage as Notre Dame buried Wisconsin by 41-13 on Saturday in Chicago. The Irish offense tacked on an additional ten points later in the period to extend the lead to 27-13 before linebackers Jack Kiser and Drew White ended the stunning comeback story with a pair of interception returns for touchdown in the final minutes. Cornerback Cam Hart pitched in with two interceptions on the day as the Irish defense shut down the Badger attack.

The ending and final score overshadowed the tense, low-scoring contest that took place during the first 45 minutes.