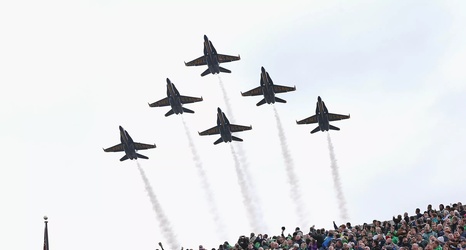 The Navy Midshipmen head to Notre Dame this Saturday, November 16th, to battle the Notre Dame Fighting Irish for the 93rd time. The last time the two teams met they played in San Diego, Calif., and the Irish won 44-22. (Did you know that Notre Dame has never played a game at the Naval Academy’s home field in Annapolis? ... I digress.) In that game the Irish racked up 584 yards of total offense (330 passing, 254 rushing) and quarterback Ian Book completed 27-of-33 passes for a then-career-high 330 yards. The first time the two teams played was in 1927, and Notre Dame traveled to Baltimore, Md.